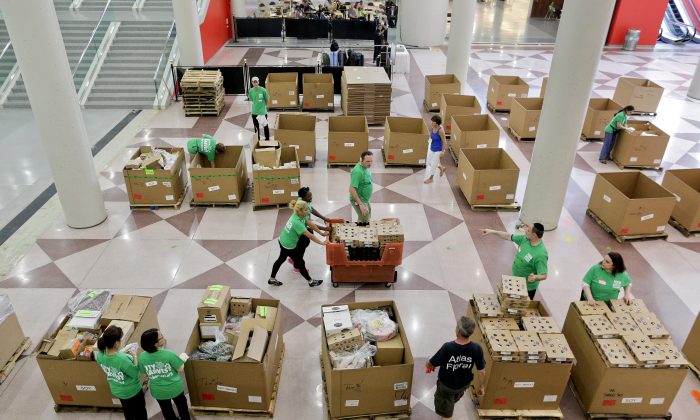 City Harvest volunteers consolidate for loading perishable items, which were donated by exhibitors at the end of the Summer Fancy Food Show convention on July 1. (Julie Jacobson/AP)
New York

NEW YORK—Some of the world’s fanciest foods are going to New Yorkers who can’t afford even basic meat-and-potato meals.

This week, they got about 90,000 pounds of delicacies left over from the largest marketplace of specialty foods and beverages in North America, the Summer Fancy Food Show in New York.

When the three-day display closed Tuesday at the Jacob Javits Convention Center on Manhattan’s West Side, hundreds of volunteers descended on mountains of artisanal cheeses, salsas, and jams, plus chocolate, olive oil, prosciutto, spices, and other items donated by many of this year’s 2,700 purveyors from 49 countries.

A half-dozen tractor-trailers then delivered the food to pantries and community programs.

“We throw away so much food in this country while so many people are going hungry,” said Maria Vives as she led a nine-person team through the aisles of the 370,000-square-foot center.

They were volunteers for the massive food giveaway—an annual joint effort by the Specialty Food Association that produces the show and City Harvest, a leading anti-hunger nonprofit that feeds at least half a million New Yorkers a week.

Nearly a fifth of the 8.4 million people who live in New York are estimated to suffer from what’s called food insecurity, meaning they don’t have consistent access to safe, nutritious food, according to the hunger-relief nonprofit Feeding America.

When the show ended, the convention center turned into a mammoth culinary demolition derby, with exhibitors packing products and dismantling displays, while workers ripped up carpeting and forklifts zigzagged to waiting trucks.

Volunteer teams rushed around the aisles, forming a sea of green, the color of their City Harvest T-shirts.

Those in need came the next morning to a pantry on Manhattan’s Upper West Side that received about 6,000 pounds of products from the show, which filled shelves and refrigerators.

For anyone who wanted it along with staples, there was something special, such as Italian panettone—a sweet, fruit-filled bread.

A Treat for All

Among the recipients was Lina Hernandez, who on many days doesn’t have enough money for a simple meal for her four children. But just before the Fourth of July, she was picking up milk, bread, and vegetables at the pantry that also offered a veritable feast, including the foie gras with truffles worth $80 a pound, duck breast, and fine Mexican chocolate wafers.

“It’s very nice to have something different,” said Hernandez, 29, as foie gras was being passed around, spread on gourmet crackers.

Brooklyn-based Les Trois Petit Cochons (French for “three little pigs”) donated the foie gras, along with the duck and a huge cured ham that landed at The West Side Campaign Against Hunger in the church basement “where we come to get our food,” said Marcos Galvez, Hernandez’s 8-year-old son, cracking a smile.

The Bronx family lost its steady income when the children’s father had to stop working at a restaurant where he slipped and fell, badly damaging his back.

Matthew Reich, City Harvest’s vice president of food sourcing, said the effort is a break from the norm.

“For the people we serve in New York City every day, when they don’t have enough to eat, we normally deliver potatoes, cabbage, onions, apples—a wide variety of fresh fruit and vegetables; we normally don’t deliver $30-a-pound cheese or pâté,” Reich said. “So this is a treat for all.”