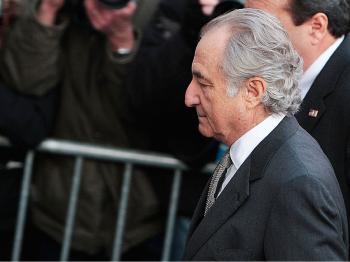 Financier and fraudster Bernie Madoff was the worst but far from the only Ponzi purveyor nabbed in 2009. (Chris Hondros/Getty Images)
Business & Economy

The Year of Ponzi Schemes Ushers In Tighter Regulation

Antonio Perez
View profile
Follow
biggersmaller
Print
NEW YORK—2009 may go down in the annals of business notoriety as the “Year of Ponzi schemes.”

In total, the $65 billion in fabricated gains were the largest investor fraud in history, and Madoff is currently in prison serving a 150-year sentence.

But that’s not all. Sir Allen Stanford, a Texas billionaire, was arrested last summer on charges of inventing an $8 billion pyramid scheme. His Stanford International Bank, an offshore holding company based in Antigua, allegedly sold more than $7 billion in CDs to unsuspecting depositors, promising sky-high interest rates.

Another prominent fraud involves Tom Petters, CEO of the Minneapolis-based Petters Group Worldwide LLC. Petters was convicted on Dec. 2 of carrying out a $3.65 billion Ponzi scheme.

Petters was guilty of wire and mail fraud, as well as money laundering. According to reports, Petters falsified documents to obtain huge loans to support his scam and his venture, which employed more than 2,000 people.

So why were so many frauds uncovered in 2009? The answer lies in that Ponzi schemes require new investors to fund old ones, and as the global recession hit, more investors than usual sought to withdraw their funds.

During boom years, investors have little use for their savings. But during a recession as money is drawn and no new investors can be found, Ponzi schemes are often uncovered.

"I think this has been an incredibly difficult year," former U.S. Securities and Exchange Commision (SEC) Chairman Harvey Pitt told Reuters Television. "We've seen a lot of financial scandals, a great deal of misconduct, an economic meltdown and a concerted push now for meaningful regulatory reform."

In total, the SEC filed 664 civil complaints in 2009 against alleged fraudsters. In 2009, more than 150 Ponzi schemes collapsed, compared to about 40 in 2008, according to the AP’s examination of court records and FBI filings.

And that will heighten regulators’ vigilance against fraud schemes in 2010.

On Dec. 16, 2009, the SEC installed new rules for money managers—investment managers will require surprise inspections by the SEC. The ruling comes more than a year after Madoff admitted to his sons that his business is “one big lie.”

Mary Schapiro, current Chair of the SEC, said in a December meeting that the new guidelines came about from “the Madoff Ponzi scheme and other frauds in which investor assets were misappropriated by investment advisers. Such frauds have caused investors to question whether their assets are safe when they entrust them to an investment adviser.”

Previously, the SEC was criticized for not reining in Madoff earlier, despite several leads and tips that the SEC received but ultimately dismissed in prior years.