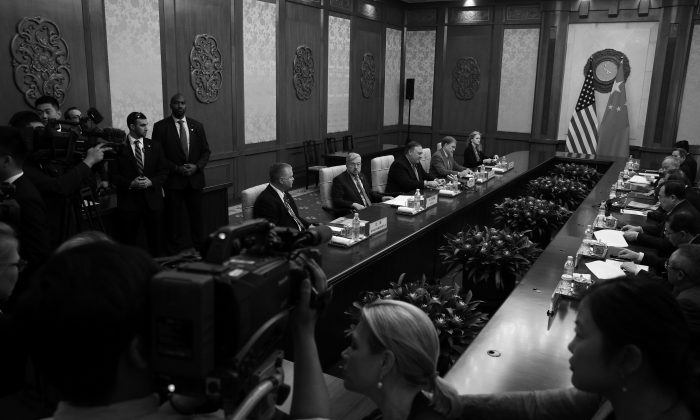 Officials usher journalists out from the room during a meeting between U.S. Secretary of State Mike Pompeo and China's State Councilor Yang Jiechi at the Diaoyutai State Guesthouse in Beijing on Oct. 8, 2018. (ANDY WONG/AFP/Getty Images)
By Jennifer Zeng

In a rarity for Beijing diplomacy, no effort was made to disguise the frosty and tense atmosphere encountered by U.S. Secretary of State Mike Pompeo, who had come for a one-day visit.

The likely cause was the landmark speech given by Vice President Mike Pence a few days ago, which has been likened by many to Winston Churchill’s Iron Curtain speech in 1946 marking the beginning of the Cold War.

On Oct. 8, Pompeo met separately with Chinese Foreign Minister Wang Yi and Director of the Office of the Foreign Affairs Commission Yang Jiechi. While Pompeo managed to put on a smiling face when shaking hands with Wang Yi in front of the cameras, the latter hardly bothered to show any friendly hospitality as the host.

At a joint press conference with Pompeo, Wang said, with a stern face: “Recently, as the U.S. side has been constantly escalating trade friction toward China, it has also adopted a series of actions on the Taiwan issue that harm China’s rights and interests, and has made groundless criticism of China’s domestic and foreign policies.

“We believe this has been a direct attack on our mutual trust, and has cast a shadow on China–U.S. relations.

“We demand that the U.S. side stop this kind of mistaken action.”

Pompeo, who was briefing Wang following his visit with North Korean leader Kim Jong Un, directly addressed ‎areas where the United States and China don’t agree, including on the South China Sea and human rights, with a smiling face. “The issues that you characterized, we have a fundamental disagreement,” he said.

Pompeo also emphasized the importance of maintaining peace and stability across the Taiwan Strait.

“We have great concerns about the actions that China has taken, and I look forward to having the opportunity to discuss each of those today, because this is an incredibly important relationship,” he said.

Pompeo didn’t meet with Chinese regime leader Xi Jinping during this visit. A senior State Department official on the trip said that wasn’t unusual, even though top U.S. officials often meet with Chinese heads of state on visits.

Pence’s speech four days ago on U.S.–China relations continues to cause shockwaves among Chinese scholars, observers, dissidents, and ordinary citizens. Some of them liken it to Churchill’s Iron Curtain speech; some say it is an epoch-marking official call to a new era of U.S.–China relations.

He Jian, a Chinese commentator said in an opinion article on the Chinese edition of The Epoch Times, that Pence’s speech marked the end of the era of “appeasement policy,” and opened up a new era of fighting back against the Chinese Communist Party’s vicious and comprehensive infiltration of the United States.

He said that the West’s appeasement toward the Chinese Communist Party wasn’t all that different from the reaction to Nazi Germany in the 1930s. However, he said, since Trump took office, the United States has awakened.

Chinese writer and political commentator Chen Pokong said that the importance of Pence’s speech can’t be overstated: It marks a significant and fundamental turning point in U.S.–China relations.

Chen said this change, nonetheless, allows for the opportunity for an improved relationship, as expressed in Pence’s speech toward the end: “As our National Security Strategy states: ‘Competition does not always mean hostility.’ As President Trump has made clear, we want a constructive relationship with Beijing, where our prosperity and security grow together, not apart. While Beijing has been moving further away from this vision, China’s rulers can still change course, and return to the spirit of ‘reform and opening’ and greater freedom.”

The Chinese Communist regime only needs to do three things to improve relations with the United States, Chen said.

One is for Beijing to keep promises it made when joining the World Trade Organization, to accept the concept of free and fair trade, and to stop harming the United States. The second is to stop persecuting the Chinese people and to allow them greater freedom. The third is to stop provocative military operations, especially in the South China Sea and the Taiwan Strait.

However, Chen said it will be very difficult for the Chinese regime to accomplish, especially allowing people greater freedom.

Pompeo’s visit to China followed trips to Japan, North Korea, and South Korea to push forward the denuclearization of the Korean Peninsula. President Donald Trump hinted over the weekend at another summit with Kim, saying on Twitter that he looks forward to seeing the North Korean leader again in the near-future.