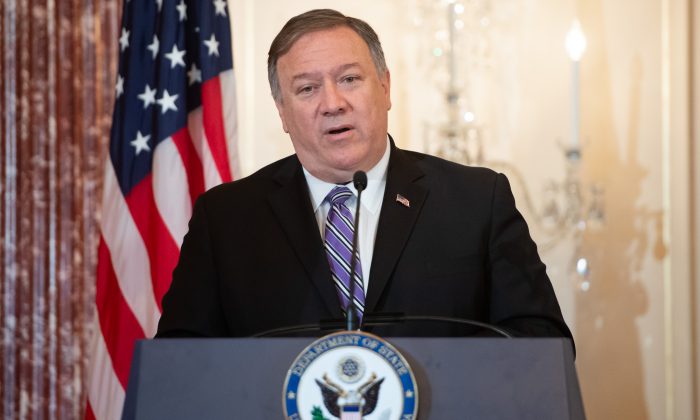 Secretary of State Mike Pompeo speaks during the release of the 2019 Trafficking in Persons Report at the State Department in Washington on June 20, 2019. (Saul Loeb/AFP/Getty Images)
Politics

The definition of human rights has changed drastically since America’s Founding Fathers drafted the Declaration of Independence in 1776, and a new State Department commission that aims to renew these rights could change the face of government around the world.

Secretary of State Mike Pompeo announced on July 8 that the Trump administration will take a new direction in foreign policy “that takes seriously the founders’ ideas of individual liberty and constitutional government.”

He cited Alexis de Tocqueville’s belief in the American experiment, noting that “democracies have a tendency to lose sight of the big picture in the hurly-burly of everyday affairs.”

“Every once in a while, we need to step back and reflect seriously on where we are, where we’ve been, and whether we’re headed in the right direction,” Pompeo said.

It’s with this in mind that he announced the formation of a Commission on Unalienable Rights that will include “human rights experts, philosophers, and activists, Republicans, Democrats, and independents of varied background and beliefs, who will provide me with advice on human rights grounded in our nation’s founding principles and the principles of the 1948 Universal Declaration of Human Rights.”

Pompeo hinted at the intentions behind this program, that it could change the “moral landscape” in international relations, similar to the effect of the 1948 Universal Declaration on Human Rights. He also noted that it wouldn’t include just the known regimes that abuse human rights, but even democratic countries that have drifted away from human rights as they were once interpreted.

If this commission accomplishes what it claims to, it could deeply impact socialist and progressive policies in the United States, and around the world, that go against the “unalienable rights” described by the Founding Fathers, and that place the interests of the collective over the rights of the individual.

The Founding Fathers declared in the Declaration of Independence, “We hold these truths to be self-evident, that all men are created equal, that they are endowed by their creator with certain unalienable rights, that among these are life, liberty, and the pursuit of happiness.”

In this statement, they describe the idea that people are created by the divine, and in that creation, they are not only equal, but also “endowed by their creator with certain unalienable rights” that include “life, liberty, and the pursuit of happiness.”

The idea that the right to life is unalienable challenges not only gross human rights violations in countries like China, where prisoners of conscience are killed for their organs, but even ideas in the West, where abortion of infants has been legalized.

Already, Pompeo’s announcement is under fire from human rights groups that go against these principles.

Joanne Lin, national director of advocacy and government affairs at Amnesty International USA, said in a statement, “This politicization of human rights in order to, what appears to be an attempt to further hateful policies aimed at women and LGBTQ people, is shameful.”

The “hateful policies” Lin noted likely refer to the idea that protections of life could end abortion, and that allowing free speech would mean people could say they oppose practices such as transsexualism.

The Amnesty International statement claims the commission trades human rights “for hate.” Lin said that “it wants to undermine rights for individuals, as well as the responsibilities of governments.”

Lin’s statements tie to a redefining of human rights as they were originally described as a protection of life and liberty, to include protections against things like being offended—often at the cost of liberty.

It also ties to a shift in what Lin describes as “the responsibilities of governments.”

‘Consent of the Governed’

In the Declaration of Independence, the Founding Fathers described the role government should play. They wrote that to secure the rights of life, liberty, and the pursuit of happiness, “governments are instituted among men, deriving their powers from the consent of the governed.”

This is radically different from the modern concepts of rights—that rights should be granted by government, instead of the principle that rights are granted by the creator yet protected by the government. Not to mention the belief that the people have a natural right to overthrow governments that no longer fulfill this role.

Under many governments today, speech can be compelled and censored, life and health can be managed by the government, and many other natural rights are restricted.

Pompeo described these phenomena in his speech, noting that sometimes human rights are violated “even in the name of human rights.” And he noted, “International institutions designed and built to protect human rights have drifted from their original mission.”

“As human rights claims have proliferated, some claims have come into tension with one another, provoking questions and clashes about which rights are entitled to gain respect,” he said. “Nation-states and international institutions remain confused about their respective responsibilities concerning human rights.”

All of these concepts will allegedly be on the table.

Pompeo said that “the commission will revisit the most basic of questions: What does it mean to say or claim that something is, in fact, a human right? How do we know or how do we determine whether that claim that this or that is a human right, is it true, and therefore, ought it to be honored?”

“How can there be human rights, rights we possess not as privileges we are granted or even earn, but simply by virtue of our humanity belong to us? Is it, in fact, true, as our Declaration of Independence asserts, that as human beings, we—all of us, every member of our human family—are endowed by our creator with certain unalienable rights?

“Each of these is an important question, and the mission of the commission is to provide advice on them and others not as purely abstract academic matters, but in a manner deeply informed by the timeless truths embedded in the American founding with a view to guiding our nation’s foreign policy,” Pompeo said.