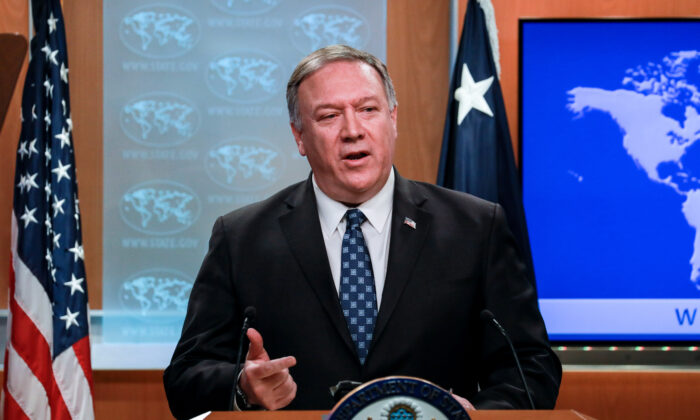 Soleimani, a terrorist who headed the Islamic Revolutionary Guard Corps’ Quds Force, was taken out by a U.S. drone strike in Baghdad on Jan. 3.

The House Foreign Affairs Committee is holding the congressional hearing on Jan. 14. Engel invited Pompeo to testify along with a panel of experts on Iran policy.

Engel said in a statement Jan. 13 that Pompeo wouldn’t be appearing.

“I’m disappointed and frustrated that Secretary Pompeo will not appear before the committee tomorrow. Each passing day raises new questions about the strike that killed General Soleimani. Was there really an imminent threat? Was it part of a larger operation? What was the legal justification? What is the path forward?” Engel said.

“With the wildly muddled explanations coming from the administration, the Secretary should welcome the opportunity to make the case and answer questions before the American people. The committee expects to hear from him soon.”

The State Department didn’t immediately return a request by The Epoch Times for comment. Neither the department nor Pompeo have confirmed that he won’t attend.

U.S. officials said they learned that Soleimani, who was responsible for the deaths of hundreds of American soldiers, was planning “imminent attacks” on U.S. interests, including U.S. embassies. President Donald Trump, who ordered the airstrike, said Soleimani was planning to blow up the U.S. Embassy in Baghdad, which was recently attacked by Iran-backed proxy groups.

Iran fired more than a dozen missiles at multiple bases in Iraq in retaliation for the killing of Soleimani, but no Americans or Iraqis were killed or wounded in the attacks. Trump said the Iranians were “standing down” and urged them to come to a peace agreement.

Officials have defended the decision to target Soleimani after some lawmakers walked away from classified briefings about the strike unimpressed with the rationale behind the killing.

“In some ways, I would love to release the intelligence and show the American people. And I can tell you, they can trust the administration on this,” national security adviser Robert O’Brien said on “Fox News Sunday.” “Unfortunately, we don’t want to lose that valuable stream of intelligence that will allow us to protect Americans going forward.”

Secretary of Defense Mark Esper said during an appearance on CBS’ “Face the Nation” that the sensitive intelligence was shown to the Gang of Eight, a group of select lawmakers, but wouldn’t be released because it would “jeopardize the sources and methods.”

Esper said the intelligence pointed to attacks on U.S. embassies and other U.S. interests.

“We had information that there was going to be an attack within a matter of days that would be broad in scale, in other words, more than one country, and that it would be bigger than previous attacks, likely going to take us into open hostilities with Iran,” he said.