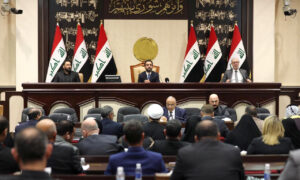 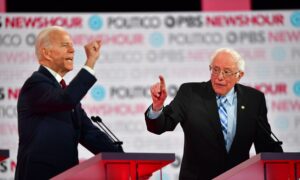 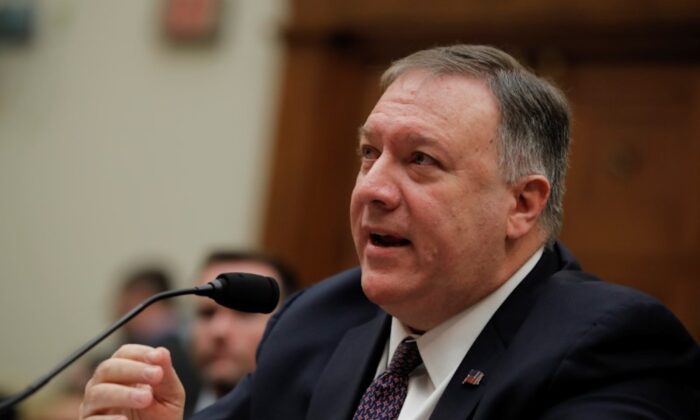 U.S. Secretary of State Mike Pompeo testifies before the House Foreign Affairs Committee hearing on “Trump administration policies on Iran, Iraq and use of force” on Capitol Hill, in Washington, on Feb. 28, 2020. (Carlos Barria/Reuters)
Middle East

Secretary of State Mike Pompeo welcomed the formation of a new Iraqi government. The two countries are scheduled to meet in June for a strategic dialogue to discuss various thorny issues, including the status of the U.S. troops stationed in Iraq.

“The United States looks forward to the formation of a new Iraqi Government capable of confronting the COVID-19 pandemic, ameliorating the country’s current economic distress, and bringing arms under state control,” said Pompeo on Monday.

Mustafa al-Kadhimi, the Iraqi Prime minister-designate, met with government leaders on Saturday to quickly form a cabinet, according to the Al-Monitor, a Middle East media.

“With my mandate to lead the Iraqi government, I pledge before my honorable people, to work to form a government that radiates the aspirations and demands of the Iraqis at the top of its priorities, safeguards the sovereignty of the country, preserves rights,” 53-year-old Kadhimi said in a message on Twitter on Thursday.

With my mandate to lead the Iraqi government, I pledge before my honorable people, to work to form a government that radiates the aspirations and demands of the Iraqis at the top of its priorities, safeguards the sovereignty of the country, preserves rights, #العراق_اولا

Kadhimi, who served as the director of Iraq’s National Intelligence Service since 2016 and was a major opposition figure during Saddam Hussein’s rule, was appointed as the prime-minister designate by Iraqi President Barham Salih after Adnan al-Zurfi, a former governor of Najaf, declined the appointment on Thursday.

Zurfi was unable to find support among the Iraqi political parties for his candidacy. He was labeled as a CIA agent according to another Al-monitor report and couldn’t gather support from the Kurdish and Sunni political parties.

Kadhimi has 30 days to form a cabinet. All political party representatives were present during his nomination ceremony and this suggests he will most likely be able to sustain his government, reported Al-monitor.

Iraqi Pres. @BarhamSalih tasked @MAKadhimi to form #Iraq’s new gov’t.
Kadhimi will finally be able to form his cabinet as almost all political bloc leaders appear to be backing him and were present at nomination ceremony
He’s 3rd PM nominee since resignation of PM Abdul-Mahdi. pic.twitter.com/3kFscnZHD3

Pompeo said the new government that is being formed due to a consensus between the Shia, Sunni, and the Kurdish political leaders will put the interests of Iraq first.

“The Iraqi people demand genuine reform and trustworthy leaders. These demands deserve to be addressed without violence or suppression. We stand with Iraqi people as they seek a sovereign, prosperous Iraq, free of corruption and terror,” said Pompeo.

The United States and Iraqi governments are scheduled to meet each other in mid-June to discuss various issues, but the most important remains the status of the American troops already stationed in the conflicted country.

“As a force for good in the nation and as Iraq’s closest friend, the United States has proposed a strategic dialogue with the government of Iraq to be held in [the] middle of June,” Pompeo told reporters at the State Department on April 7.

“With the global COVID-19 pandemic raging and plummeting oil revenues, threatening an Iraqi economic collapse, it’s important that our two governments work together to stop any reversal of the gains we’ve made in our efforts to defeat ISIS and stabilize the country.”

From the U.S. side, the strategic dialogue will be led by Under Secretary for Political Affairs, David Hale.