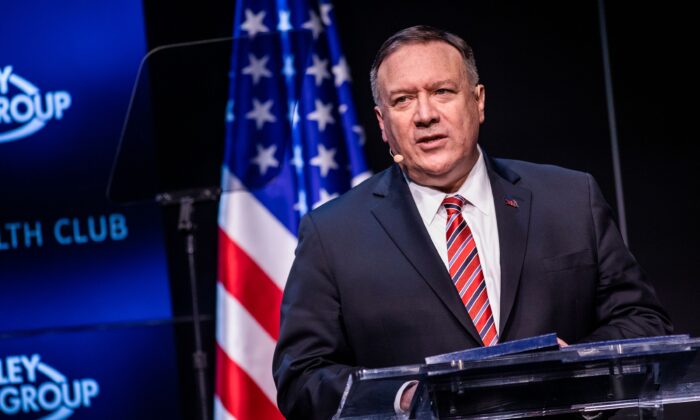 US Secretary of State Mike Pompeo delivers remarks to attendees during an event at the Commonwealth Club in San Francisco, California on Jan. 13, 2020. (Philip Pacheco / AFP via Getty Images)
US-China Relations

Secretary of State Mike Pompeo on Jan. 13 warned Silicon Valley leaders of the dangers of working with the Chinese communist regime, imploring them not to let U.S. technology “power a truly Orwellian surveillance state.”

“We need to make sure that our companies don’t do deals that strengthen a competitor’s military or tighten the regime’s grip of repression in parts of that country,” Pompeo told a meeting of the Silicon Valley Leadership Group at the Commonwealth Club in San Francisco. The group is an association of more than 350 companies in the California tech hub.

Pompeo’s remarks come amid growing concerns about the Chinese regime’s use of advanced technology for domestic surveillance and control, including through a sprawling network of CCTV cameras—with roughly one camera for every four people—many of which are equipped with facial-recognition technology.

An Uyghur human rights bill passed by the House of Representatives in December 2019 includes export controls of U.S. technology that aids state-sponsored surveillance in the northwestern region of Xinjiang, where an estimated 1 million Uyghurs and other Muslim minorities are detained in “re-education” camps. A Senate version of the bill was passed in September 2019, and lawmakers are currently working on a compromise bill to pass and send to the president.

In February 2019, Massachusetts-based lab equipment maker Thermo Fisher Scientific announced that it would stop selling DNA sequencers to Xinjiang, after receiving criticism from U.S. lawmakers that its products were used by Chinese authorities to identify individuals in its campaign of suppression.

On Jan. 2, former Google executive Ross LaJeunesse criticized Google for putting profits over human rights, citing its work with the Chinese regime, which included the “Dragonfly” project, a since-scrapped censored search engine for China, and its artificial intelligence (AI) center in Beijing.

“Just when Google needed to double down on a commitment to human rights, it decided to instead chase bigger profits and an even higher stock price,” LaJeunesse wrote on social media platform Medium.

In his speech, Pompeo cited 2019 Senate testimony from a former chairman of the Joint Chiefs of Staff, Gen. Joseph Dunford, who said, “The work that Google is doing in China is indirectly benefiting the Chinese military.”

The Trump administration recently imposed export controls on AI technology that analyzes satellite imagery in order to protect emerging technology that could give the United States a significant intelligence or military advantage.

The Chinese regime has prioritized a military development strategy known as “military-civil fusion,” Pompeo said, referring to its effort of leveraging private industry and university research to advance its military.

“Even if the Chinese Communist Party gives assurances about your technology being confined to peaceful uses, you should know there is enormous risk, risk to America’s national security as well.”

The state secretary also highlighted the regime’s “rampant theft of intellectual property,” which not only harms individual victim companies, but also jeopardizes U.S. innovation, he said.

He said U.S. business leaders have privately shared with him their concerns of being targeted by Chinese economic espionage: “fears of getting hacked; fears of a Chinese state-backed company undercutting your margins; fears that a Chinese company will steal your idea, manufacture it in China, and then sue you out of business for patent infringement.”

The FBI currently has about 1,000 open intellectual property (IP) cases, “nearly all of them somehow connected to China,” Pompeo added.

Federal authorities have in recent years cracked down on cases of Chinese state-sponsored IP theft, including through cyberhacking, economic espionage at U.S. companies, and tech transfers by Chinese researchers at universities and research institutes.

At the same, the U.S. administration has tightened regulations due to Chinese companies that pose security risks.

The State Department, the Department of Homeland Security, and branches of the U.S. military have all banned their staff from downloading Chinese social media app TikTok onto government-issued phones, due to cybersecurity concerns.

Meanwhile, the Department of the Interior is reportedly set to permanently halt its fleet of nearly 1,000 Chinese-made drones due to the risk that they could be used by Beijing for spying.

In 2019, the United States barred Chinese tech giant Huawei from doing business with U.S. companies due to similar security concerns.