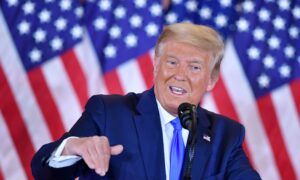 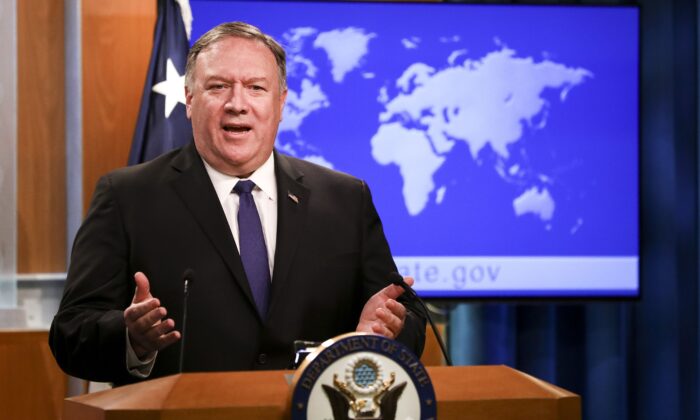 Pompeo: ‘There Will Be a Smooth Transition to a Second Trump Administration’

Secretary of State Mike Pompeo suggested that President Donald Trump will win the presidential election, joking that “there will be a smooth transition to a second Trump administration.”

Pompeo smiled in response to a question from reporters about whether the Department of State is preparing to engage with Democratic candidate Joe Biden’s team. The Epoch Times has not yet called a winner for the 2020 presidential race and will wait until the outcomes of legal challenges are resolved, vote-counting is finished, and the Electoral College votes.

Pompeo later said that should Democratic challenger Joe Biden win the election, a transition would be successful.

“The world should have every confidence that the transition necessary to make sure that the State Department is functional today, successful today, and successful with the president who’s in office on January 20 a minute after noon will also be successful,” Pompeo told reporters on Tuesday.

Pompeo was asked if questions about voter fraud and irregularities undermine the election, and he said that they do not. The secretary of state cited historical precedent.

“It took us 37 plus days in an election back in 2000, [we] conducted a successful transition then,” he said. “I am very confident that we will count, and we must count every legal vote … any vote that wasn’t lawful ought not be counted. That dilutes your vote, if it’s done improperly, right? When we get it right. We’ll get it right. We’re in good shape.”

President Trump’s legal team has filed a number of lawsuits in battleground states over a variety of alleged irregularities, while Trump himself has claimed that voter fraud occurred.

Several mainstream news outlets—all at around the same time on Saturday—declared the race for Biden before he claimed victory in a speech.

A number of GOP officials, including top members of Congress, have not acknowledged a Biden victory. That includes Senate Majority Leader Mitch McConnell (R-Ky.), who told senators on the floor of the Senate that Trump is well within his rights to challenge the election and weigh his legal options.

On Tuesday, Sen. Ron Johnson (R-Wisc.), the head of the Senate Homeland Security Committee, was asked about whether he congratulated Biden yet. He said, “No … Nothing to congratulate him about yet.”