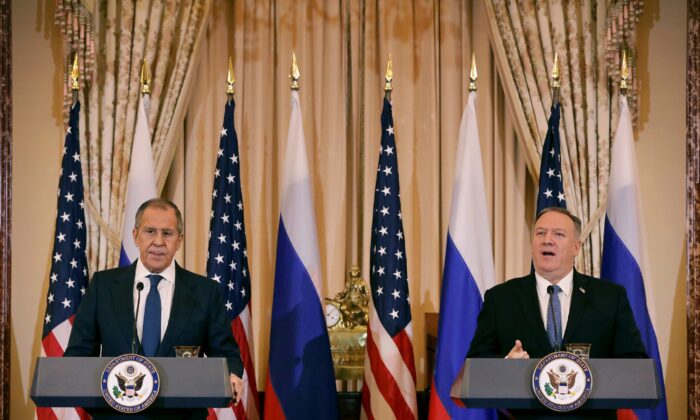 Pompeo met with Russian Foreign Minister Sergei Lavrov in Washington. After the meeting, he told reporters: “On the question of interference in our domestic affairs, I was clear, it’s unacceptable and I made our expectations of Russia clear.”

“The Trump administration will always work to protect the integrity of our elections. Period. Should Russia or any foreign actor take steps to undermine our democratic processes, we will take action in response,” he added.

Former special counsel Robert Mueller’s team and the Senate Intelligence Committee have said in reports that Russia tried to interfere in the 2016 election.

Pompeo met with Lavrov and Russian President Vladimir Putin in May in Russia.

“Our bilateral ties are of course complicated. We cooperate in some areas; in other places, we compete,” he said. He and Lavrov agreed earlier this year “to keep our lines of communication open and to keep our conversations candid.”

He said that the parties agreed on a final, fully verified denuclearization for North Korea and that a major portion of the conversation was Ukraine. Lavrov just met with Putin and Ukrainian President Volodymyr Zelensky.

“I reiterated to Foreign Minister Lavrov that Crimea belongs to Ukraine and that the resolution of the conflict in eastern Ukraine begins with adherence to commitments made under the Minsk agreements,” Pompeo said.

Another topic was arms control; President Donald Trump wants a new trilateral agreement involving both Russia and China after the United States and Russia withdrew from the Intermediate-Range Nuclear Forces Treaty treaty earlier this year.

“We spoke frankly and businesslike,” he said. “We are trying not only to listen to each other, but hear each other.”

Lavrov said that relations between the countries were “hindered and continues to be hindered by the wave of suspicions that has overcome Washington.”

“We have highlighted once again that all speculations about our alleged interference in domestic processes in the United States are baseless,” he added. “There are no facts that would support that. We did not see these facts. No one has given us this proof because it simply does not exist.”

Lavrov said Russia wanted to publish the communications from that time but the Trump administration declined to do so.

“We hope that the turbulence that appeared out of thin air will die down,” he said.