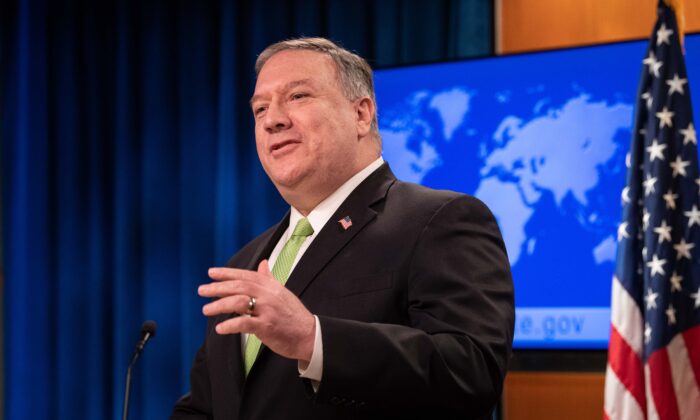 Secretary of State Mike Pompeo speaks the press conference at the State Department in Washington on May 20, 2020. (Nicholas Kamm/AFP via Getty Images)
By Tom Ozimek

Secretary of State Mike Pompeo on Wednesday rejected what he called false comparisons between America’s law enforcement response to the protests sparked by the police-custody death of George Floyd, and the brutal crackdowns on free speech and assembly by authoritarian regimes.

Floyd’s death during an arrest that saw a Minneapolis police officer, since fired and criminally charged, kneel on his neck for nearly nine minutes, sparked widespread protests and spurred debate over reform of policing practices. Some demonstrations degenerated into looting and violence, which was at times met with a decisive law enforcement response.

Pompeo said at a press briefing and, separately, in an email to State Department staff, obtained by The Hill and Politico, that the way the bouts of civil unrest in the wake of Floyd’s death have played out prove that America cherishes values like the freedom of protesters to voice grievances without fear of reprisal, unlike what typically happens in tyrannical regimes.

“We’ve now seen people say, ‘Hey, we’re calling for changes in the way law enforcement works,'” Pompeo told reporters at a press conference Wednesday on the occasion of the release of the department’s release of the annual religious freedom report.

“You can see this debate take place in America,” Pompeo continued, referring to the public discourse around reforming police practices.

“That doesn’t happen in nations across the world. In Tiananmen Square 31 years ago, when thousands of people were massacred, instead they repressed journalists, they disappeared people. It’s fundamentally different,” he said.

Pompeo rejected the notion that there is a “moral equivalency between what takes place in these countries where they repress their people and they bludgeon their people and they burn down their religious facilities,” and the way debate takes place in America, where he said journalists have the freedom to “demand that we provide responses to you and hold us accountable.”

Calling America “special,” Pompeo insisted that “challenges like the ones that we’re confronting here in the United States today will be managed head-on, there will be a political process that’s engaged of, there will be wide open debate.”

In Pompeo’s Wednesday email to staff, he said Floyd’s death sent shock waves around the world and that “it is appropriate” to address the concerns it has exposed.

“Our own civic unrest gives us an extraordinary opportunity to tell our story abroad: the American response to events of these past weeks presents a stark contrast to what happens in totalitarian regimes around the world,” Pompeo wrote, according to Politico.

“We must reject unequivocally the false charges—many of them vile propaganda emanating from China, Iran and other autocracies—questioning America’s credibility in promoting human rights and democracy abroad,” Pompeo added.

“In the United States, when the people demand change or security or prosperity, politicians listen. In autocracies, the people don’t make demands of government for fear of being officially denounced, locked up, or executed,” he wrote.

“However, there is no moral equivalence between our free society, which works through tough problems like racism, and other societies, which do not allow anything to be discussed,” Craft told reporters in a telephone briefing, in which she pushed back against criticism from China and Iran, both known human rights violators, over America’s response to the protests sparked by Floyd’s death.

“I would challenge anyone to compare their record with our record as far as how they treat situations,” she said, citing China’s treatment of its minority Muslim Uighur population in Xinjiang, as well as Tibet and Africans, adding there should be a “dialogue on the difference” between those situations and what was happening now in the United States.