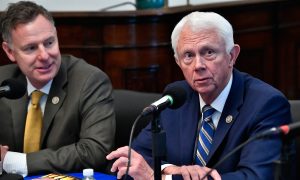 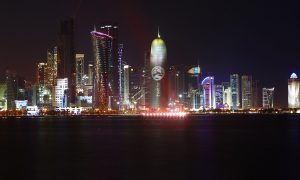 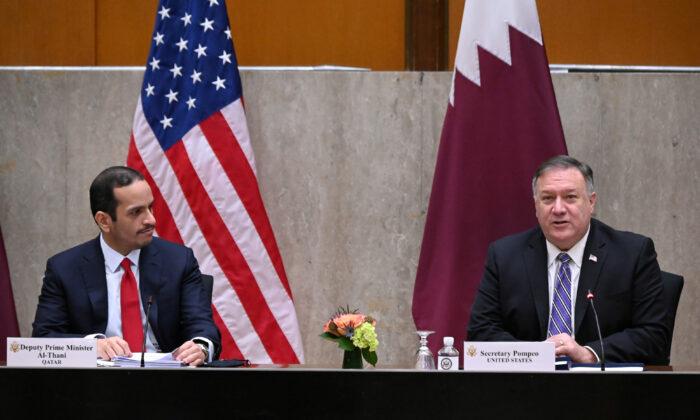 U.S. Secretary of State Mike Pompeo stressed at the 3rd annual strategic dialog between the United States and Qatar on Monday that a solution should be found to resolve the three-year rift between Qatar and other Gulf states, saying that “the Trump administration is eager to see this dispute resolved.”

“Qatar plays an invaluable role in helping stabilize Gaza, as well as regional efforts to de-escalate tensions both in Syria and in Lebanon,” Pompeo said at the two-day event, focused on security, defense, economic, and cultural cooperation.

“To keep our focus on this work, and to close the door to increased Iranian meddling, it’s past time to find a solution to the Gulf rift,” he said.

Gulf rift began among some of the most powerful states in the Arab world when Saudi Arabia, Egypt, the United Arab Emirates, and Bahrain severed ties with Qatar and closed transport routes in June 2017, accusing it of supporting terrorism.

“The Trump administration is eager to see this dispute resolved and to reopen Qatar’s air and land borders currently blocked by other Gulf states. I look forward to progress on this issue,” Pompeo said.

Qatar is represented at the meeting by Qatari Deputy Prime Minister Mohammed bin Abdulrahman al-Thani, Finance Minister Ali Sharif al-Emadi, and Minister of Commerce Ali bin Ahmed al-Kuwari. Pompeo is joined by the U.S. Treasury Secretary Steven Mnuchin, and Commerce Secretary Wilbur Ross. The event will overlap with the Israel-UAE relation normalization agreement signing ceremony, which will be held by President Donald Trump on Sept. 15 at the White House.

Pompeo announced on the first day of the talks that the U.S.-Qatar Open Skies relationship had entered into force, “cementing the civil aviation partnerships” between the two countries.

Pompeo and Deputy Prime Minister and Minister of Foreign Affairs al-Thani signed at the opening ceremony a Memorandum of Understanding to declare the year 2021 as the year of U.S.-Qatar Year of Culture intended to enhance cultural and educational exchanges between the two countries.

Mnuchin and Al-Emadi also signed a Memorandum of Understanding that expresses support for an investment forum in 2021 in the United States where companies from both countries can explore new investment opportunities.

Another memorandum of understanding would be signed by Qatar and U.S. Agency for International Development (USAID) to support Fulbright scholarships, al-Thani said.

The signing of the memoranda “show the range and the depth … of our ties and underscore our continued constructive engagement despite the unique regional challenges our country has been successfully managing over the last three years,” he continued.

“Despite regional challenges including the ongoing blockade against us, our cooperation has continuously strengthened since we held the first Qatar-U.S. Strategic Dialogue in January 2018.”

He added that Qatar has invested billions of dollars in the U.S. economy and the United States has invested in Qatar and its development, which together “translate to tens of thousands of jobs.”

The trade and investment relationship is based on the open market and fair business practices, and over the last five years, Qatar’s imports from the United States has amounted to over $23 billion, Mnuchin said.

The United States welcomed Qatar’s efforts to cut terrorist financing and strengthen anti-money laundering policies, Mnuchin said, adding that this would counter “malign financial activity of the Iranian regime, which continues to sponsor terror across the Middle East.”

The total U.S. investment in Qatar is $110.6 billion, making the United States the largest foreign investor in Qatar, Ross said. He added that American companies consider Qatar’s energy sector, especially LNG (liquefied natural gas) production and as well as the semiconductor industry, as an excellent opportunity for further investments.

Ross praised the country for how it has managed the economic problems caused by the regional blockade.

“Your entrepreneurial transformation of a sudden dairy product shortage into an air-conditioned and fully automated farm that made the country a net exporter is a wonderful and heroic achievement,” Ross said.

He also reiterated Pompeo’s call to resolve the Gulf rift, which should lead to normalization of Qatar’s diplomatic and trade relationships with its neighbors.

Simon Henderson, a Baker Fellow, and director of the Bernstein Program on Gulf and Energy Policy at The Washington Institute said in an article on Sept. 11 that the simultaneous presence in Washington of Qatar and UAE representatives may create an opportunity to end the three-year-long rift between Qatar and the UAE.

Although some Qatari media criticize the normalization agreement between the UAE and Israel, Qatari and Israeli officials maintain “discrete but close” contacts, Henderson wrote.