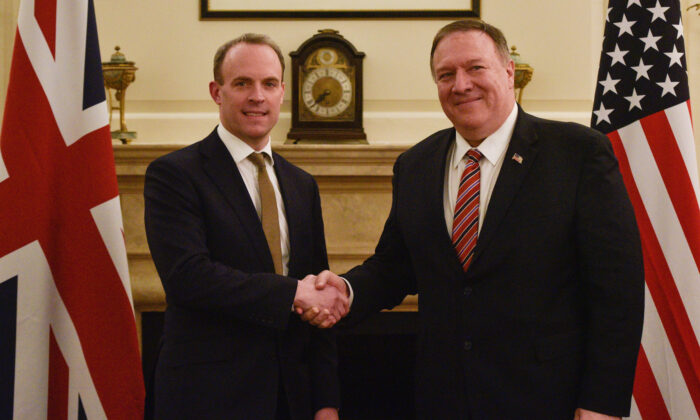 Pompeo Says Huawei Is a Risk, but US Will Resolve Differences With UK

U.S. Secretary of State Mike Pompeo is confident that the United States and the United Kingdom will work out a solution to build a highly secure 5G network despite differences in their approach. A decision made by the UK on Tuesday allows Chinese company Huawei’s equipment to be used in building a new mobile phone network, although not in the most sensitive areas. The UK’s partnership with Huawei is not considered ideal by the United States.

The United States believes that allowing a Chinese company with deep ties to the Chinese Communist Party (CCP) to build a communication network would give the CCP access to sensitive data like “private information of your citizens or the national security information,” Pompeo said in a public discussion with British Foreign Secretary Dominic Raab during a visit to the UK.

“The Chinese Communist Party presents the central threat of our times,” Pompeo said, This is “why we’ve been talking about this with the United Kingdom for so long,” he added.

“We are evaluating exactly what the United Kingdom’s decision was on Tuesday of this week, and I am very confident that our two nations will find a way to work together to resolve this difference and deliver on behalf of our two people world-class, secure technology and infrastructure,” Pompeo said.

However, the United States will never permit American national security information to travel over technology that “we don’t have trust and confidence in,” Pompeo said. “That’s the standard,” and it applies to all systems, regardless [of] whether it is a Microsoft system, an Ericsson Nokia system, or a Chinese system.

The United States has long suggested it could limit intelligence sharing with countries that fail to exclude Huawei.

“With respect to information and the Five Eyes relationship, that relationship is deep, it is strong, it will remain,” Pompeo said during the public discussion.

The participants of the “Five Eyes” privileged system for sharing U.S. intelligence which also includes the UK, Australia, Canada, and New Zealand, “will work together on this to ensure that these systems are sufficiently secure, … and we will ensure that we protect American information to that standard,” Pompeo said.

Raab explained that the UK made its decision after “three years’ worth of analysis,” including “technical security analysis.” He believes that the country has a way to protect its security as well as the security of information exchange with its intelligence allies, though the Five Eyes. Raab, however, agrees that a network built with the help of companies deeply tied to the Chinese communist party posed security concerns and said, “We ought to be looking to replace, in the future, high-risk vendors with high-trust vendors.”

Raab sees more significant challenges in the continuous and rapid changes in information technology, as 5G will last only for a period of time and may be replaced by even more advanced technology in the future. Thinking strategically, Raab sees a “huge opportunity for cooperation” for the two countries in the security infrastructure area. It was one of the reasons why Raab invited Pompeo to visit Tech Nation—a UK network that assists ambitious tech entrepreneurs in the growth of their businesses and skills—and a UK division of American video game and software development company, Epic Games.

When asked by a reporter whether there is any possibility that the UK will reconsider its decision regarding Huawei’s involvement in building a 5G network, Pompeo said that technology constantly requires replacement or upgrade and “decisions about technology are continuous.”

“We have made the case to every country in the world, that we think putting Huawei technology anywhere in your system is very, very difficult to mitigate, and therefore not worth the candle.” However, “every country will make its own sovereign decision just like the United Kingdom did,” said Pompeo.