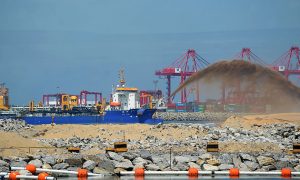 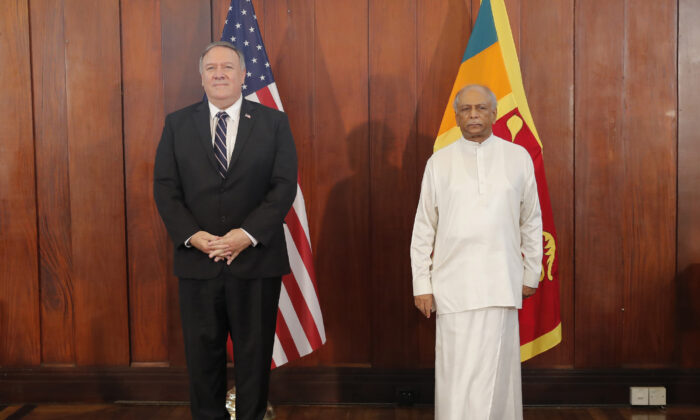 U.S. Secretary of State Mike Pompeo warned Sri Lanka on Wednesday against the Chinese Communist Party’s predatory business practices, as the top U.S. diplomat kept up tough criticism of the Chinese regime on a tour of South Asia.

Pompeo arrived in Sri Lanka from India as part of a four-leg tour aimed at bolstering allies against China’s increasing political and military inroads in the region in recent years. In contrast to India, which is locked in a military stand-off with China and was the first stop on Pompeo’s trip, Sri Lanka is a close ally of Beijing.

Pompeo touted the economic partnership with American companies which “are the most reliable partners on the planet.” “They’re accountable to the law, they’re transparent, they’re assets to the communities in which they operate,” he said at a press conference in Colombo, Sri Lanka adding that “good governance, transparency in policy consistently will attract even more American investment.”

This is in stark “contrast to what China seeks,” Pompeo said. “We see from bad deals, violations of sovereignty and lawlessness on land and sea, that the Chinese Communist Party is a predator, and the United States comes in a different way. We come as a friend and as a partner,” he said.

Gunawardena said at the joint press conference, ”Sri Lanka is a neutral, non-aligned country committed to peace. … On that principle, we hope to continue with our relations with the United States and other countries.”

“Conscious of the opportunities and responsibilities that come with our strategic location, we see the importance of maintaining the freedom of navigation in our seas and airspace, also protecting sea lines of communication and the undersea cables,” Gunawardena said adding that all countries should adhere to international law including UN conventions.

Sri Lanka’s leaders, aware of the country’s strategic location at the heart of the Indian Ocean, traditionally had a foreign policy of nonalignment with major powers, Rathindra Kuruwita, a journalist and a researcher from Colombo, Sri Lanka wrote for The Diplomat.

This policy worked for Sri Lanka well during the Cold War, Kuruwita said, but he believes that this time the country will need to choose sides.

Earlier this month, Beijing announced it would provide Sri Lanka with a $90 million grant to help rural development, after President Gotabhaya Rajapaksa, who took office in 2019, sought help from a visiting Chinese delegation in disproving a perception that China-funded megaprojects are “debt traps.”

Concerns are rising that the Sri Lankan government is backsliding on democratic reforms. Last week, Parliament by a large majority approved a constitutional amendment concentrating powers under Rajapaksa and reversing efforts a previous government had made to curb authoritarianism.

With the change, Rajapaksa will be able to hold ministries, as well as appoint and dismiss ministers. He will also be the appointing authority of the elections, public service, police, human rights, bribery, or corruption investigation commissions.

Sri Lanka has been ruled under a powerful executive presidential system since 1978, but a reformist government in 2015 clipped much of the president’s powers and gave them over to Parliament and independent commissions, saying successive presidents had been more authoritarian.

China has invested billions of dollars in Sri Lankan ports and highways as part of its Belt and Road Initiative of transport and energy links, a program designed to trap smaller countries in debt.

In 2017, Sri Lanka could not pay its debt to China and was coerced into signing a 99-year lease with a Chinese company for the use of its Hambantota Port.

“[The] Hambantota port, which lies close to sea lanes through which two-thirds of China’s oil imports pass, is essential for China’s energy security,” Kuruwita wrote.

During the bloody civil war that wracked Sri Lanka for twenty-five years, until 2009, “China was one of the few countries to back the Sri Lankan government,” wrote Scott Wingo, a doctoral candidate in political science at the University of Pennsylvania.

The conflict between the Sri Lankan Army and the Liberation Tigers of Tamil Eelam (LTTE)—a terrorist organization—left nearly 70,000 civilians dead and an estimated one million people displaced, according to a State Department report.

Sri Lankan former President Mahinda Rajapaksa, who took power in 2005, resorted to Chinese funding to rebuild the country. Sri Lanka joined the Chinese regime’s Belt and Road Initiative which included the construction of the Hambantota port and other infrastructure projects, Wingo wrote for the Jamestown Foundation.

The United States provides assistance to Sri Lanka in the form of grants to spur the country’s economic growth by attracting private-sector investments, the State Department statement said.

Since Sri Lanka’s independence in 1948, the United States provided the country with more than $2 billion in assistance, including new counterterrorism assistance programs to help Sri Lankans bring the surviving perpetrators of the 2019 Easter bombing to justice, deter terrorist travel, and support the prosecution of terrorism financing, according to the statement.

The United States also launched some initiatives to boost Sri Lanka’s defense including the donation of two Coast Guard cutters that are used by Sri Lanka to patrol its territorial waters, the statement said.