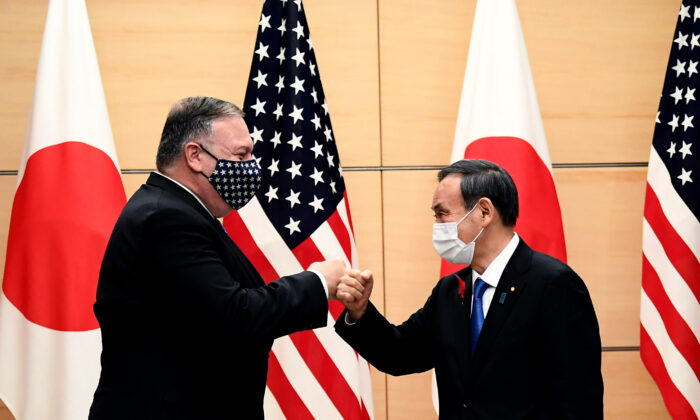 “Prime Minister Suga was a powerful force for good, and for this relationship, too, when he was the chief cabinet secretary,” Pompeo said, of Suga’s stint in former Prime Minister Abe’s cabinet. “The United States has every reason to believe he will strengthen our enduring alliance in his new role.”

Pompeo’s visit to Tokyo from Oct. 4 to 6 includes meetings with his foreign ministry counterparts from the other “Quad” countries—Australia, India, and Japan—to discuss issues such as China’s dealings with the CCP (Chinese Communist Party) virus, trade issues, Beijing’s new national security legislation in Hong Kong, tensions in the South China Sea, and the Chinese regime’s brutal repression of religious and ethnic minorities.

The U.S. State Department said in a statement Monday that Pompeo’s visit to the country aims to promote the U.S.-Japan alliance as a force for transparency, accountability, openness, prosperity, and peace in the Indo-Pacific and around the world.

At tomorrow’s Quad meetings, Secretary Pompeo and Foreign Ministers from 🇦🇺, 🇮🇳, and 🇯🇵 will discuss the challenges posed by COVID-19, security and economic issues in the Indo-Pacific region, and the importance of upholding a rules-based international system. pic.twitter.com/xSPRIMjXKy

The Quad was revived in 2017 to deepen security cooperation and coordinate alternatives for regional infrastructure financing offered by the communist regime in Beijing. The CCP has denounced the group as an attempt to contain its development.

Pompeo made the remarks before he was scheduled to meet the newly installed Suga, who assumed his position following Abe’s resignation last month due to ill health.

He told reporters on his way to Tokyo that the four countries hope to have some “significant achievements” at the meeting, without elaborating.

“The world is possibly becoming even more unpredictable and uncontrollable due to heightening selfish nationalism and growing tension between the U.S. and China,” Suga told Japanese media Monday.

He said he will pursue diplomacy that is based on the Japan-U.S. alliance as a cornerstone and “strategically promote the FOIP [Free and Open Indo-Pacific initiative],” while establishing stable relations with neighbors including China and Russia.

Pompeo is scheduled to return to Washington on Tuesday evening.

Batmunh Toya and The Associated Press contributed to this report.