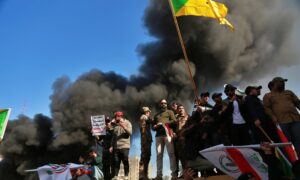 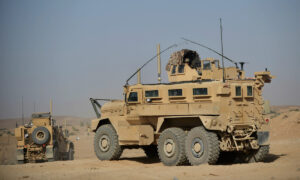 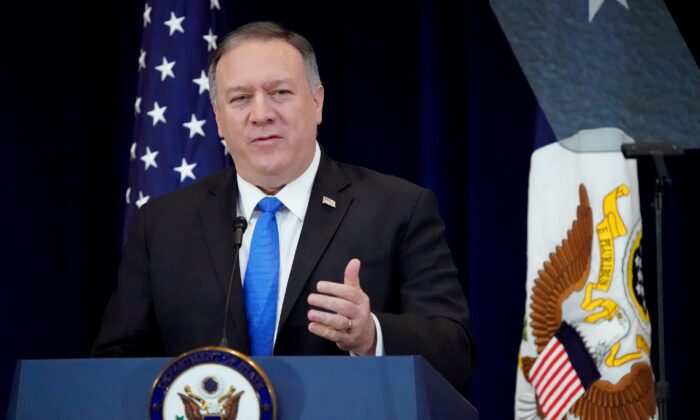 Secretary of State Mike Pompeo delivers remarks on human rights in Iran at the State Department in Washington on Dec. 19, 2019. (Erin Scott/Reuters)
US News

Secretary of State Mike Pompeo won’t take a scheduled trip to Ukraine and other eastern European and Asian countries in January, the State Department said on Jan. 1.

Pompeo planned to travel to Ukraine on Jan. 3 to meet with President Volodymyr Zelensky before going to Belarus, Kazakhstan, Uzbekistan, and Cyprus and meet with leaders in those countries. Ukraine has been closely watched in recent months due to its being at the epicenter of the House Democrat-led impeachment of President Donald Trump.

State Department spokeswoman Morgan Ortagus said in a statement that Pompeo “must postpone” his scheduled visits “due to the need for the Secretary to be in Washington, D.C., to continue monitoring the ongoing situation in Iraq and ensure the safety and security of Americans in the Middle East.”

The trip will be rescheduled in the near future, she said.

Iran-backed militias and other Iraqis gathered outside the U.S. Embassy in Baghdad on Dec. 31, 2019, before breaching the compound’s outer walls, gaining access to restricted areas. The mob hurled rocks at the buildings, burned security posts and walls, and used a battering ram to inflict damage to doors and windows. They did not gain entry to the buildings.

Trump ordered about 100 Marines to deploy to the embassy from Kuwait and two Apache helicopters helped security forces keep the demonstrators from overrunning the compound.

The militias withdrew on Jan. 1.

Trump and U.S. military leaders promised retribution for what happened, but the president told reporters late Tuesday that he does not think the situation will lead to a war with Iran.

The United States conducted airstrikes on the Iranian-backed terror group, Kataib Hezbollah, after the group killed an American civilian contractor. The airstrikes left dozens dead and dozens of others wounded.

“Iran killed an American contractor, wounding many. We strongly responded, and always will. Now Iran is orchestrating an attack on the U.S. Embassy in Iraq. They will be held fully responsible,” Trump said in a statement on Twitter.

“To those many millions of people in Iraq who want freedom and who don’t want to be dominated and controlled by Iran, this is your time!” Trump wrote in another missive. In another, he called the situation “The Anti-Benghazi,” referring to when four Americans, including U.S. Ambassador to Libya Christopher Stevens, were killed in a preplanned attack against the U.S. Embassy in Benghazi in 2012.

Trump also said that he did not golf on New Year’s Eve, calling outlets that claimed he did so “fake news.”

“The Fake News said I played golf today, and I did NOT! I had meeting in various locations, while closely monitoring the U.S. Embassy situation in Iraq, which I am still doing. The Corrupt Lamestream Media knew this but, not surprisingly, failed to report or correct!” he wrote.