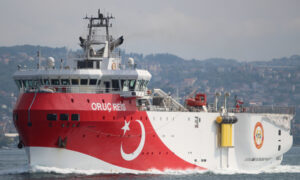 Turkey May Resume Talks With Greece, Warns Against EU Sanctions
0 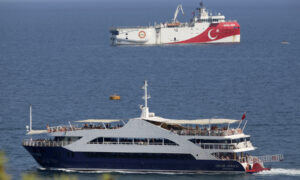 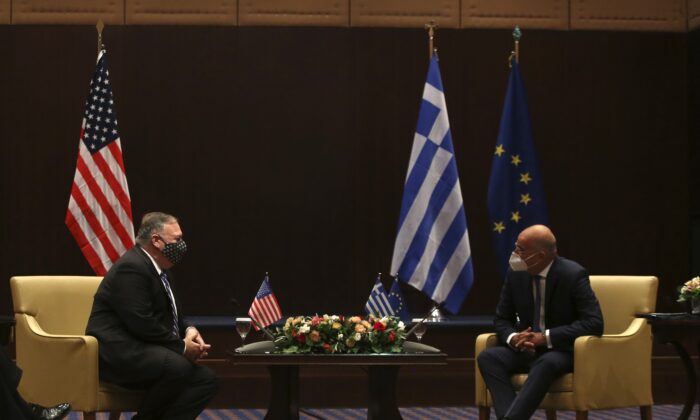 THESSALONIKI, Greece—U.S. Secretary of State Mike Pompeo said on Sept. 28 that Washington will use its diplomatic and military influence in the region to try to ease a volatile dispute between NATO allies Greece and Turkey over energy rights in the eastern Mediterranean.

Pompeo began a five-day regional tour in the northern Greek city of Thessaloniki, days after Greece and Turkey committed to restarting a diplomatic dialogue on the dispute that triggered a dangerous military build-up—and fears of military conflict—in the disputed maritime area over the summer.

The United States and Greece “reiterated their dedication to enhancing their close cooperation as NATO allies, using all appropriate means at their disposal, in order to safeguard stability and security in the wider region,” the two countries said in a joint statement after Pompeo met with Greek Foreign Minister Nikos Dendias.

Relations between Greece and neighboring Turkey deteriorated sharply this year over disputed maritime boundaries and exploration rights in the eastern Mediterranean.

Turkey sent a research vessel, accompanied by warships, to prospect for energy resources in an area Greece claims is on its own continental shelf and where it claims exclusive economic rights. Athens sent warships of its own to the area.

Pompeo welcomed the decision of Athens and Ankara to restart exploratory talks and said maritime disputes should be solved through dialogue, not demonstrations of power.

“We’ve watched the Greeks move in that direction trying to achieve that,” he told Greece’s ANA state news agency. “We hope the Turkish government will see it the same way, and we hope the exploratory talks not only get kicked off right, but it’s important that they’re resolved in a way that delivers outcomes that each of the two nations find more than acceptable.”

European Union members later this week are to discuss imposing sanctions on Turkey for its actions.

In Istanbul, Turkish President Recep Tayyip Erdogan voiced support for the peaceful resolution of disputes and renewed a call for solutions that would protect everyone’s rights.

“I invite all countries in the Mediterranean that are our neighbors, and especially Greece, to stop viewing the eastern Mediterranean as a zero-sum game. Come, let’s together turn the Mediterranean into a basin of peace once again … let’s make energy a matter for cooperation, not conflict,” Erdogan said.

Pompeo had discussed the situation in the eastern Mediterranean late on Sept. 27 with NATO Secretary-General Jens Stoltenberg as he headed to Greece.

Pompeo’s regional tour will also include Italy, the Vatican, and Croatia.

Later on Sept. 28, he will depart to the Greek island of Crete where he is scheduled to meet with Greek Prime Minister Kyriakos Mitsotakis and visit a U.S. naval base at Souda Bay.

Last October, Pompeo visited Athens and signed a revised defense cooperation agreement with Greece that provided for increasing joint U.S.–Greece and NATO activity at three locations in Greece as well as infrastructure and other improvements at Souda Bay.

Amid the tension with Turkey, Greece has announced major arms purchases, including fighter jets from France, as well as warships, helicopters, and weapons systems.

Pompeo is the first U.S. Secretary of State to visit Greece’s second-largest city of Thessaloniki. Security was tight in the port city, with the venue of Pompeo’s meeting with Dendias changing from the originally planned location, a local ministry, to a hotel for security reasons, authorities said.

About the time Pompeo was due to fly to Crete, about 1,500 people gathered in Thessaloniki’s center for two separate demonstrations to protest his visit, carrying signs reading “The hawk of war is not welcome in our country,” and “The murderers of the peoples are not welcome.” The protests were organized by left-wing groups and the Communist Party.

During his visit to Thessaloniki, Pompeo signed a bilateral science and technology agreement, and hosted energy sector business leaders for a discussion to highlight energy diversification and infrastructure projects in Greece.

He also joined members of Thessaloniki’s Jewish community to commemorate Yom Kippur at the local Jewish Museum, as police cordoned off a large section of the city center. No date has yet been set for the start of the Greek–Turkish exploratory talks.