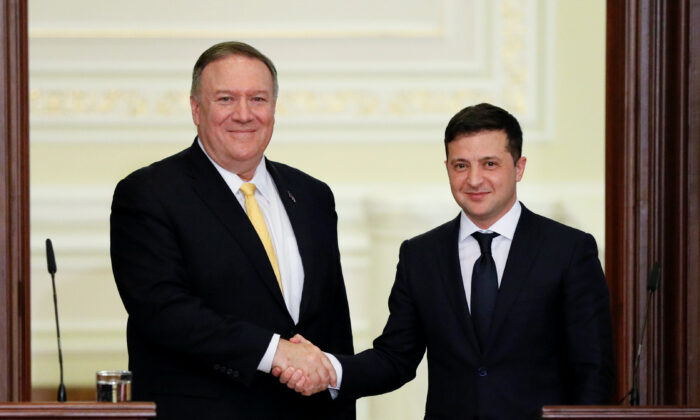 Secretary of State Mike Pompeo assured Ukraine that the United States supports the country in its quest for democracy as he met with officials including Ukranian President Volodymyr Zelensky.

“Today, I am here with a clear message. The United States sees that the Ukrainian struggle for freedom, democracy, and prosperity is a valiant one. Our commitment to support it will not waver,” Pompeo said during a joint press conference after his meeting with Zelensky.

“The commitment starts with our strong support for his efforts to strengthen democratic institutions in this country. The final victory for the Revolution of Dignity is within reach. The United States has worked hard to help Ukraine develop a strong rule of law, a healthy investment climate, a reformed defense sector, and energy independence, and we’ll continue to do so.”

“We’ll maintain support for a diplomatic solution to the Russia-instigated conflict in east Ukraine, and we’ll maintain financial support for Ukraine’s security. We will never accept anything less than the full restoration of Ukraine’s control over its sovereign territory,” Pompeo said, referring to Russia’s annexation of Crimea during the Obama administration.

Zelensky said told Pompeo that he hopes the United States “will be more actively engaged to the processes of peaceful settlement in the east of Ukraine and the occupation of Crimea” and expressed gratitude for American efforts related to Ukraine’s attempt to join the North American Treaty Organization (NATO).

“The United States have been and will remain our key ally in defending sovereignty and territorial integrity of Ukraine. We dearly appreciate efforts of President Trump and his administration on this track. We are grateful for your personal, unflinching, and unwavering stance regarding the war in Donbas and the illegal annexation of Crimea,” he said.

Russia and Ukraine are fighting in Donbas, a region in eastern Ukraine.

“Pompeo assured Ukraine of the full support of the United States in stopping Russia’s aggression and restoring Ukraine’s sovereignty and territorial integrity in full,” Ukraine said in a statement after the meeting.

“Grateful for the clear and powerful messages restated by Washington of the USA’s unwavering support for Ukraine in: countering Russian aggression; upholding Ukraine’s sovereignty and territorial integrity; enhancing Ukraine’s defense capabilities and implementing critical reforms,” she said in a statement.

Pompeo shared pictures of himself in Ukraine and wrote that he had a “good discussion” with Prystaiko.

“The U.S. welcomes Ukraine’s efforts to bring peace to the Donbas. Russia must reciprocate. Our sanctions will remain in place until Ukraine’s territorial integrity and sovereignty is restored,” he wrote in a statement.

Before the meeting, he said that the U.S. support for Ukraine “is unwavering, and I’m intent on underscoring this as I meet with Ukrainian government leaders to discuss ways we can advance our strategic partnership and reinforce Ukraine’s position as a free and democratic state.”

Pompeo arrived in Ukraine on Jan. 30 and met with Prystaiko and Zelensky on Jan. 31.

The visit came amid the impeachment trial of President Donald Trump. Asked if the impeachment had spoiled bilateral ties, Zelensky said he knew he would be asked about the trial.

“It seems to me it’s the other way around.  We have excellent relations between our countries,” he told reporters.

Asked if a White House visit for Zelensky was conditioned on Ukraine investigating Hunter Biden and Burisma, Pompeo also said no.

“No, there’s no condition of the nature you described for President Zelensky to come to Washington and have that visit,” Pompeo said in response to a question. “We’ll find the right time. We’ll find the appropriate opportunity.”

Pompeo was the first member of Trump’s cabinet to visit Ukraine since Zelensky was elected last year. Ukraine became the focus of Democrats after a person filed a complaint against Trump over his July 2019 phone call with Zelensky, during which the president asked his counterpart to “look into” corruption allegations against Hunter Biden, who worked for the Ukrainian-based Burisma, and Biden’s father, the former vice president.

Because Joe Biden is running for the Democratic presidential nomination, Democrats said Trump’s request amounted to an attempt to get a foreign country to interfere with the 2020 election. House Democrats impeached Trump last month but Senate Republicans are widely expected to acquit the president in the coming days.