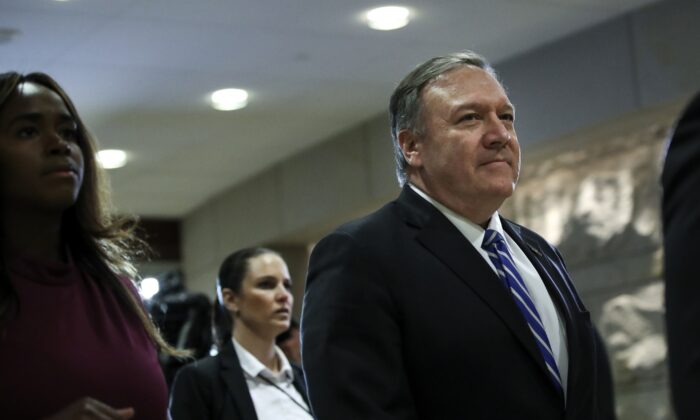 Secretary of State Mike Pompeo arrives for a briefing with members of the House of Representatives about the situation with Iran, at the U.S. Capitol in Washington on Jan. 8, 2020. (Drew Angerer/Getty Images)
US News

Pompeo on Soleimani’s ‘Imminent Attacks’: ‘We Don’t Know Precisely’ When or Where

“We had specific information on an imminent threat and that threat stream included attacks on U.S. embassies,” Pompeo added at a briefing at the White House later Friday.

Pompeo said information gleaned by the intelligence community and other sources was used in giving classified briefings to members of Congress.

“We provided them information that I don’t think any reasonable person could say that to have not acted—had the President not made that choice, that we would have been culpably negligent in the recommendations that we made to the President. We saved American lives by taking this action,” Pompeo said.

President Donald Trump said earlier on Thursday that intelligence suggested Soleimani was planning to try to blow up the U.S. Embassy in Baghdad, among other plans.

“We also did it for other reasons that were very obvious. Somebody died, one of our military people died,” he added.

Asked about Trump’s statement, Pompeo didn’t answer directly. He said that Soleimani’s forces, or Iran-backed militias, penetrated the outer walls of the U.S. Embassy in Baghdad just days prior to the strike.

“I don’t think there’s any doubt that Soleimani had intentions not only to take action against our forces, our diplomats in Iraq, but in other countries around the region and world as well,” Pompeo said.

A number of lawmakers, primarily Democrats, have questioned whether the information gathered about Soleimani’s plans was sufficient to order a strike to take him out. A U.S. airstrike killed the general in Baghdad overnight on Jan. 3.

Rep. Gerry Connolly (D-Va.), a member of the Foreign Relations Committee, called the briefing given to lawmakers “sophomoric and utterly unconvincing.” He said the rationale to take out Soleimani couldn’t “pass a graduate school thesis test.”

House Foreign Affairs Chairman Eliot Engel (D-N.Y.) added: “The basic theme of it was essentially the administration saying: ‘Trust us.’”

Shortly after the briefing, a war powers resolution was introduced in the House and approved the next day. There are several other pieces of legislation aimed at curtailing military action against Iran currently in the House or Senate being considered by members of Congress.

Pompeo defended the briefing and said all top U.S. military officials agreed that the strike against Soleimani was the correct course of action.

“We made clear to every member of Congress—I can say this publicly—there was enormous consistency across all of the senior leaders and the national security team that ultimately this was the right thing to do and it would keep America safer,” he said. “And I am happy to own that recommendation.”