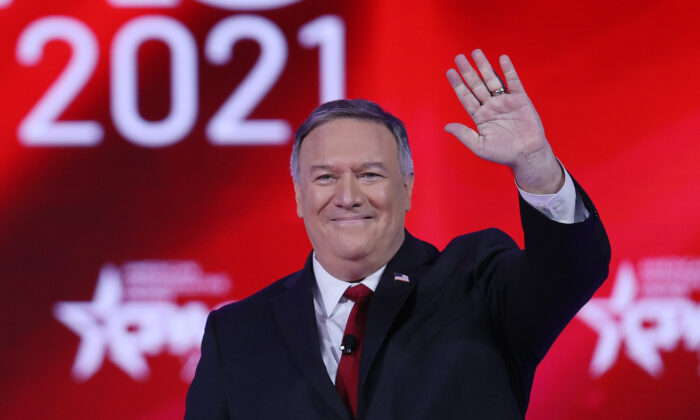 Former Secretary of State Mike Pompeo is keeping open the possibility of running for president in 2024 if former President Donald Trump decides not to, saying late March 3, “I’m always up for a good fight.”

“I care deeply about America. You and I have been part of the conservative movement for an awfully long time now. I aim to keep at it,” Pompeo said during an appearance on Fox News’ “Hannity.”

“I’ll take that as a strong ‘maybe,'” host Sean Hannity responded. “I don’t know how to interpret that.”

Pompeo, 57, served as the CIA director and secretary of state during the Trump administration. Before that, he was a U.S. representative for a Kansas district in the lower chamber.

Pompeo has also served as an officer in the U.S. Army.

Potential Republican 2024 candidates are largely waiting to see if Trump will run for a third time after winning in 2016 and losing in 2020. Most Republicans believe Trump will win the nomination if he launches a third bid.

Trump, 74, told a crowd at the Conservative Political Action Conference in Florida over the weekend that he was considering another run.

“Democrats should suffer withering losses in the midterms and to lose the White House decisively four years from now … I may decide to beat them for a third time,” he said, repeating his claim that he actually was victorious in the last election.

Trump also ruled out starting a third party, telling supporters, “I’m going to continue to fight right by your side.”

Meanwhile, Pompeo, a staunch Trump backer, said on March 3 that he’s concerned about how President Joe Biden is being seen by counterparts around the world.

“When the United States exhibits weakness, it creates real risk for our soldiers, sailors, airmen, and Marines all across the world,” Pompeo said. “Weakness begets wars and strength determines whether an adversary is going to be deterred, and it also determines whether allies really want to toss in with us when the times get most difficult.”