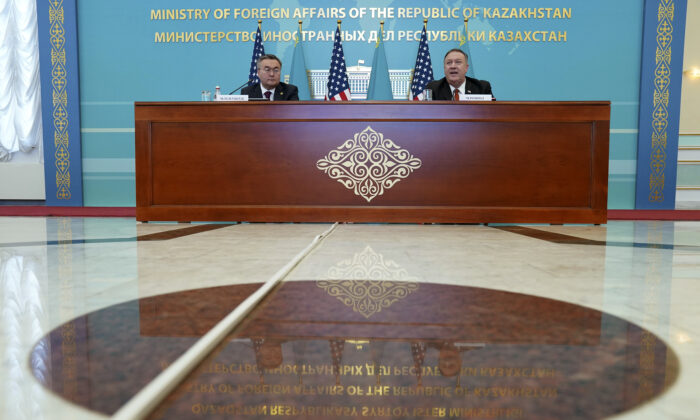 U.S. Secretary of State Mike Pompeo on Sunday pressed Kazakhstan to be wary of Chinese investment and influence, urging the Central Asian nation and others to join calls demanding an end to China’s repression of minorities.

Bringing a message similar to the one he has delivered repeatedly to other countries, Pompeo told Kazakhstani officials that the attractiveness of Chinese investment comes with a cost to sovereignty and may hurt, instead of help, the country’s long-term development.

“We fully support Kazakhstan’s freedom to choose to do business with whichever country it wants, but I am confident that countries get the best outcomes when they partner with American companies,” he said at the press conference. “You get fair deals. You get job creation. You get transparency in contracts. You get companies that care about the environment, and you get an unsurpassed commitment to quality work.”

Pompeo also urged Kazakhstani officials to continue reforms that would allow greater U.S. investment and said the two nations were discussing the possibility of opening direct passenger flights between the countries.

Pompeo also discussed economic and security cooperation with his Kazakhstani counterpart Minister of Foreign Affairs Mukhtar Tileuberdi. The United States is currently one of the biggest investors in Kazakhstan, comprising “18.5 percent of [its] total foreign direct investment.”

Tileuberdi and Pompeo talked at a joint press conference, about the contract that American agricultural giant Tyson Foods signed in December with the Republic of Kazakhstan and private holding multinational company Kusto Group also operating in Kazakhstan, on cooperation leading to a construction of a modern beef processing plant and “an entire ecosystem “for developing livestock production in Kazakhstan.

Also, Chevron and ExxonMobil will continue to invest in the Kazakh oil and gas sector, contributing to the development of the county’s oil fields and job creation.

There is also a potential to expand the cooperation between two countries in the information technology and scientific research, said Tileuberdi.

Pompeo said that Kazakhstan’s reforms aimed to “strengthen the economic prosperity and democracy and increasing public confidence in the government,” which are welcomed by the United States. Pompeo and Tileuberdi emphasized that the “fundamental rule of law” and “basic protections for transparency in contracts” are the key prerequisites necessary to expand the economic cooperation between two countries further and are fundamental for Western companies to do business in Kazakhstan.

“The American risk-taking entrepreneurs will love the hardworking, capable, talented people here in Kazakhstan to be part of their teams, and we will do good things for American business and for the people of Kazakhstan when we get all of these opportunities brought to fruition,” Pompeo said.

Both countries also cooperate in fighting international terrorism. The United States has provided border security assistance to Kazakhstan, and both countries cooperate in combating money laundering for terrorism financing, “narcotics abuse and trafficking, and human trafficking.” the statement says. Kazakhstan also helps to support the peace process in Afghanistan mostly through “providing logistical access to Afghanistan” and professional education to young Afghans.

Pompeo congratulated Kazakhstan on its repatriation of ISIS terrorists from Iraq and Syria. Kazakhstan has taken back nearly 600 fighters and family members detained in areas formerly controlled by the group.

“I have and will continue to commend the Kazakhstani government for its leadership in repatriating foreign terrorists fighters and their families from Iraq and Syria,” he said. “I hope this commitment to justice will inspire other nations to do the same.”

Pompeo praised Kazakhstan for its efforts to counter the spread of the coronavirus from China. He said the United States is helping the country, which shares roughly 1,100 miles of its border with China, with expertise from the Centers for Disease Control and Prevention and providing laboratory equipment.

Kazakhstan’s “quick action to stop the spread of the virus has been incredibly impressive,” he said.

Kazakhstan is among the growing list of countries that have suspended travel links with China.

Pompeo met with ethnic Kazakhs whose families have gone missing or been detained in China’s widespread crackdown on Muslims and other ethnic and religious minorities in its western Xinjiang region. He praised the Kazakhstani government for not repatriating asylum seekers back to China at the Chinese government request.

“The protection of basic human rights defines the soul of a nation,” he said, thanking Kazakhstan for taking in those fleeing persecution. “The United States urges all countries to join us in pressing for immediate end to this repression. We ask simply for them to provide safe refuge and asylum for those seeking to flee China. To protect dignity, just do what’s right.”

The United States was the first nation to recognize Kazakhstan’s independence from the former Soviet Union in 1991. “Just 24 hours after your independence back in 1991, almost 30 years ago, my predecessor, Secretary of State James Baker, traveled here to support your vision for a sovereign, prosperous nation,” said Pompeo.

Under Soviet rule, Kazakhstan was a testing ground for nuclear weapons, as “more than 25 percent of all the nuclear tests in the world was conducted on [its] soil.” The United States helped the country recover from the damaging effects of these tests on the people and the environment.

And more recently, in January of 2018, President Trump welcomed then-President Nursultan Nazarbayev to the White House, who was Kazakhstani first president. Pompeo also met today with Kazakhstani President Kassym-Jomart Tokayev, and with Nazarbayev.