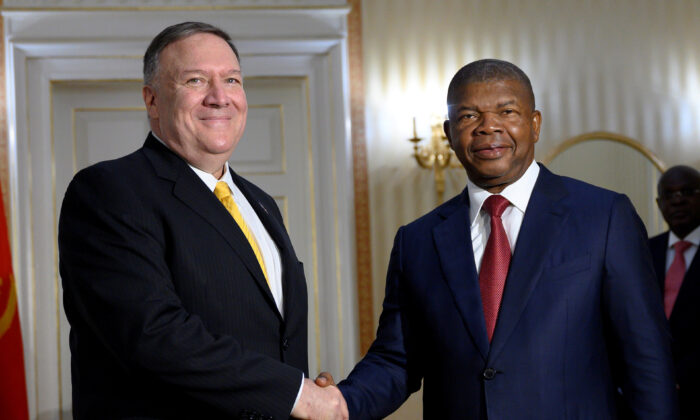 U.S. Secretary of State Mike Pompeo, in his Africa stop on Feb. 17, praised Angola’s president for his dramatic actions to recover billions of dollars looted by corrupt officials, saying it would help attract investment to one of Africa’s largest economies.

“Corruption is the enemy of a nation’s growth and progress,” Pompeo said at a business reception in Angola. “The culture of impunity is destructive to economic growth and the well-being of the ordinary, Angolan people.”

Corruption had “stunted this nation’s vast potential for far too long,” he added.

Lourenço’s anti-corruption activities have not spared family members of former Angolan leader Eduardo dos Santos, who was in power for nearly 40 years. A recent investigation by a global consortium of journalists into Dos Santos’s daughter Isabel led to allegations of widespread mismanagement of state funds, which she has denied.

Pompeo said that the United States could assist Angola in holding some individuals involved in corruption accountable for their actions. He said the United States wants global financial transactions to be transparent and clean.

Pompeo also commended Lourenço’s initiative to privatize state-owned enterprises in the country, saying that it would attract private investment. In October 2019 Angolan state-owned gas company Sonangol formed a new gas consortium with American Chevron, BP, ENI, and Total, for exploration and production of natural gas in Angola, with an initial investment of $2 billion.

Business Opportunities for US and Angola

Angola is one of the richest countries in Africa, but is also about $40 billion in debt to China, according to the Africa Center for Strategic Studies.

Pompeo also announced the establishment of the new Development Finance Corporation dedicated to partnering with the private sector to finance solutions to the most critical challenges faced by developing countries all over the world. It has a budget of $60 billion, and much of that capacity will be available for Africa, said Pompeo.

In November 2019, the Trump administration launched a new initiative called Prosper Africa aimed at expanding trade between the United States and African countries by assisting U.S. businesses to “pursue commercial opportunities across Africa,” according to the U.S. Small Business Administration.

Pompeo welcomed Angola’s efforts to strengthen security in the region, citing Angola’s involvement in a peacekeeping operation in Lesotho in 2017.

“If parliament’s new private investment law is implemented transparently and faithfully, then many, many more American businesses, many, many more Western businesses will come to Angola and create wealth, jobs, and opportunity for the Angolan people,” said Pompeo.