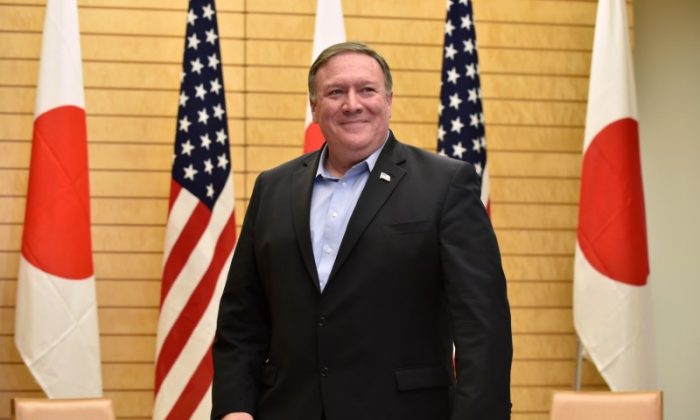 Secretary of State Mike Pompeo dismissed a sour statement put out by North Korea after his visit to Pyongyang, telling reporters in Tokyo on July 8 that he had “good faith, productive” conversations with his counterparts.

In a statement by an unnamed spokesman on the heels of Pompeo’s two-day visit, North Korea said that Washington’s attitude and stance were “regrettable” and that the United States “came up only with its unilateral and gangster-like demand for denuclearization.”

“So look, people are going to make certain comments after meetings. If I paid attention to what the press said, I’d go nuts, and I refuse to do that,” Pompeo said.

Pompeo said North Korea reaffirmed its commitments to complete denuclearization and destroying a missile engine test site. The two sides also formed a team to carry out day-to-day work and agreed to a mid-July meeting in Panmunjom regarding the repatriation of remains of American service members.

“Yep, the road ahead will be difficult and challenging, and we know critics will try to minimize the work that we’ve achieved,” Pompeo said.

“But our allies—like the Republic of Korea and Japan—President Trump, and I believe that peace is worth the effort,” he added. “And that’s something that we all want.”

“I see China’s hands all over this. We’re in a fight with China,” Graham told “FOX News Sunday”. “If I were President Trump, I would not let China use North Korea to back me off of the trade dispute. We’ve got more bullets than they do when it comes to trade.”

Graham also warned Pyongyang over a suggestion in the press release that Pompeo might not have slept well, given the pressure of the denuclearization talks.

“To our North Korean friends—can’t say the word friend yet—you asked Pompeo did he sleep well,” Graham said. “If you knew what I knew about what we could do to the leadership of North Korea, you wouldn’t sleep very well.”

Pompeo and Trump have both promised Kim Jong Un a prosperous future for North Korea should he abandon nuclear weapons. The United States is seeking complete, irreversible, and verifiable denuclearization. On July 8 in Vietnam, Pompeo reiterated the promise, drawing on Vietnam’s “incredible rise” as an example.

“President Trump believes your country can replicate this path—it’s yours if you’ll seize the moment. The miracle can be yours.” Pompeo said in a message to Kim. “If they are able to do this, they will be remembered, and Chairman Kim will be remembered as a hero of the Korean people.”

But before complete denuclearization is achieved, Washington is committed to maintaining crippling sanctions on the communist regime.

“And so while we are encouraged by the progress of these talks, progress alone does not justify the relaxation of the existing sanctions regime,” Pompeo said. “There is also no change to our ironclad commitment to the defense of our allies, the Republic of Korea and Japan. The security of our allies is integral to our American security.”

Trump and Kim met in person during a historic summit in Singapore in June. The two leaders signed a joint statement agreeing to work toward peace on the Korean Peninsula, a new era for relations between Washington and Pyongyang, and the complete denuclearization of North Korea. Kim made a verbal promise to destroy a missile engine testing site and Trump promised to suspend war games with South Korea.

North Korea’s statement says that the United States did not follow through on the spirit of the joint statement and “never mentioned the issue of establishing a peace regime on the Korean Peninsula.” The two Koreas are still technically at war. Pompeo said that the United States is clear about the three parts of the joint statement and that simultaneous progress is necessary on all three fronts.

“Each of those needs to be conducted in parallel,” Pompeo said. “We need to work on those efforts simultaneously.”

“We have been very clear there were three parts of the agreement in the Singapore summit.”

Pyongyang also said that America’s suspension of war games is “incomparable” to the destruction of a nuclear bomb test site, a concession Kim made ahead of the Singapore summit.

Asked how long the United States should wait to restart military exercises with South Korea if the talks with the North stall, Sen. Joni Ernst (R-Iowa) told CBS’s “Face the Nation” that the war games should restart “soon.”

“I think we should continue with military exercises,” Ernst said. “Obviously, I believe that they have a purpose in keeping the peninsula safe and making sure that should anything ever happen we are well rehearsed with our allies to engage. So I would say soon if we don’t see those talks continue.”