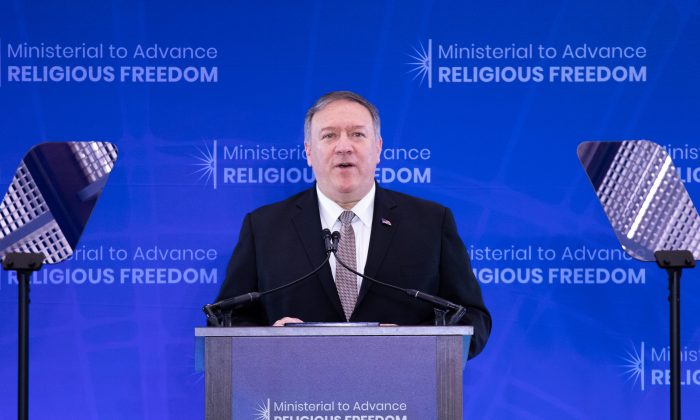 WASHINGTON—On the last day of the three-day Ministerial to Advance Religious Freedom, Vice President Michael Pence and Secretary of State Mike Pompeo each addressed hundreds of ministers, religious leaders, and others from 106 nations, to celebrate the “unalienable rights” of religious freedom, and to “turn convictions to action.” Pompeo announced two new initiatives.

Pence said, “Since the earliest days of our nation, America has stood for religious freedom. Our first settlers left their homes and all they knew for the ‘chance to begin the world over again.’ They carved protections for religious liberty into our founding charters and earliest laws. And after our independence was won, the crafters of America’s constitution enshrined religious liberty as the first of our American freedoms.

“Our Declaration of Independence proclaims that our precious liberties are not the gift of government, but rather they are unalienable rights endowed by our Creator. Americans believe people should live by the dictates of their conscience rather than the diktats of government.”

Pompeo celebrated the growth of the Ministerial to Advance Religious Freedom in his speech. “I also want to note the remarkable growth in attendance from one year to two. I hope we can keep that trend up. There are hundreds more attendees, and we thank you all for taking time out of your incredibly busy schedules to be part of it.

“It is the largest human rights ministerial ever held at the United States Department of State. It is also—with our country now some 200-plus years old, it is the largest event ever hosted by a U.S. Secretary of State ever. It’s truly remarkable.”

Both Pence and Pompeo noted that 83 percent of the world’s population live in nations where religious freedom is either threatened or denied entirely. The both said the situation was urgent, without a moment to lose.

Pompeo said that it is time to “turn our convictions into action,” and announced two initiatives.

“First, we’ve put our money where our mouth is.”

Pompeo said that the State Department has established an International Religious Freedom Fund—a multi-donor fund that provides rapid assistance to victims of persecution all throughout the world. “It’s already serving good, and its purpose around the world is expanding.”

Pompeo said since 2017, the United States had provided more than $340 million for vulnerable religious and ethnic communities in Iraq, particularly those that ISIS had targeted for genocide.

“And today, I have the privilege to announce that USAID is providing $27 million in new humanitarian assistance to keep this very progress going,” Pompeo said.

Another initiative is to create an International Religious Freedom Alliance.

“We hope that this new vehicle—the first ever international body devoted to this specific topic—will build on efforts to date and bring like minded countries together to confront challenges of international religious freedom.”

Pompeo said more countries have had or are planning to have similar events to advance religious freedom. Those countries include the United Kingdom, the United Arab Emirates, Albania, Colombia, Morocco, and the Vatican.

“And we need to make progress, too, in the world’s multilateral institutions.  Thanks to Poland’s efforts, the UN General Assembly has named August 22nd as a special day to remember the victims of religious persecution.  Please commemorate it in your home countries too,” Pompeo said.

Both Pence and Pompeo singled out China as “home to one of the worst human rights crises of our time.” “It is truly the stain of the century,” Pompeo said.

“The Chinese Communist Party demands control over the lives of the Chinese people and their souls. Chinese Government officials have even discouraged other countries from attending this very gathering,” Pompeo said.

“ If you’re here today and you’re a country which has defied the Chinese pressure to come here, we salute you and we thank you. And if you have declined to attend for the same reason, we took note.”

“In September of last year, Chen Huixia, a member of the Falun Gong, was sentenced to three and a half years in prison simply for practicing his faith.

“In May of 2018, authorities arrested Wang Yi, the pastor of Early Rain Covenant Church, a large unregistered church in Chengdu, for openly criticizing the government’s controls on religious freedom. He’s still in jail today,” Pompeo said.

Pence noted that although Christian faith is also targeted in China, “but in one of the greatest ironies in the history of Christianity, it is today’s Communist China which is seeing the fastest growth in the Christian faith anywhere in the last 2,000 years.

On the second day of the Ministerial to Advance Religious Freedom, July 17, President Trump met with 27 survivors of religious persecution from 17 countries. Four of them are from China, including Falun Gong practitioner Yuhua Zhang, Uyghur Muslim Jewher Ilham, Tibetan Buddhist Nyima Lhamo, and, Christian Manping Ouyang.

Pence said, this week, the United States placed visa sanctions on Burma’s top two military leaders—the commander in chief and his deputy—as well as two commanders of light infantry brigades, for a brutal campaign of ethnic cleansing against the Rohingya people that has forced more than 700,000 to flee across the border to Bangladesh.