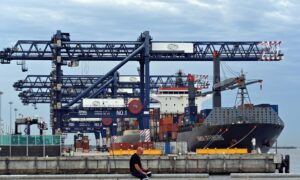 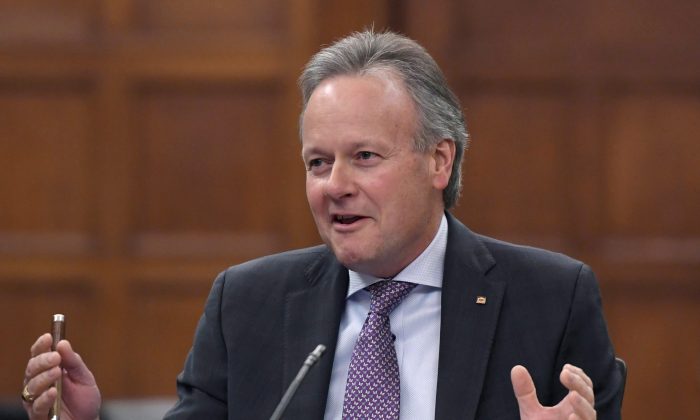 Governor of the Bank of Canada Stephen Poloz prepares to appear before a finance committee on Parliament Hill in Ottawa on April 23. (The Canadian Press/Justin Tang)
Economies

OTTAWA—Canadians have amassed a $2 trillion mountain of household debt that’s casting a big shadow over the timing of the Bank of Canada’s next interest rate hike, governor Stephen Poloz said in a May 1 speech in Yellowknife.

To Poloz, the “sheer size” of debt burden also means its associated risks are to endure for a while, although he’s optimistic the economy can navigate them.

The debt pile, he said, has been growing for three decades in both absolute terms and when compared to the size of the economy—and about $1.5 trillion of it currently consists of mortgage debt.

The central bank has concerns about the ability of households to keep paying down their high levels of debt when interest rates continue their rise, as is widely expected over the coming months.

“This debt has increasing implications for monetary policy,” he said in his address to the Yellowknife Chamber of Commerce.

Poloz has introduced three rate hikes since last July following an impressive economic run for Canada that began in late 2016.

But the central bank stuck with its benchmark rate of 1.25 percent last month as it continued its careful process of determining the best juncture for its next hike. The bank’s next announcement is May 30, but many experts only expect Poloz’s next increase to come at July’s meeting.

Poloz said that the volume of what Canadians owe is one of the key reasons why the bank has been taking a cautious approach to raising its trend-setting rate. He called it an important vulnerability for individuals and leaves the entire economy exposed to shocks.

“This debt still poses risks to the economy and financial stability, and its sheer size means that its risks will be with us for some time,” Poloz said.

“But there is good reason to think that we can continue to manage these risks successfully. The economic progress we have seen makes us more confident that higher interest rates will be warranted over time, although some monetary policy accommodation will still be needed.”

Poloz said debt is a natural consequence of several factors, including the combination of a strong demand for housing and the prolonged period of low interest rates maintained in recent years to stimulate the economy.

The governor also provided detail on issues the bank is examining as it considers the timing of its next rate increase.

If it raises rates too quickly, the bank risks choking off economic growth, falling short of its ideal inflation target of 2 percent and could lead to the type of financial stability risk it’s trying to avoid, he said.

But if the governing council lifts the rate too slowly, Poloz said it could intensify inflationary pressures to the point it overshoots the bank’s bull’s-eye. Poloz added that moving too gradually could also entice Canadians to add even more debt and further boost vulnerabilities.

In his speech, he also noted several other areas of concern the bank is monitoring closely as it considers future hikes. They include the economic impacts of stricter mortgage rules, the ongoing uncertainty about U.S. trade policy, the renegotiation of the North American Free Trade Agreement, and a number of competitiveness challenges faced by Canadian exporters.

“These forces will not last forever,” Poloz said.

“As they fade, the need for continued monetary stimulus will also diminish and interest rates will naturally move higher.”