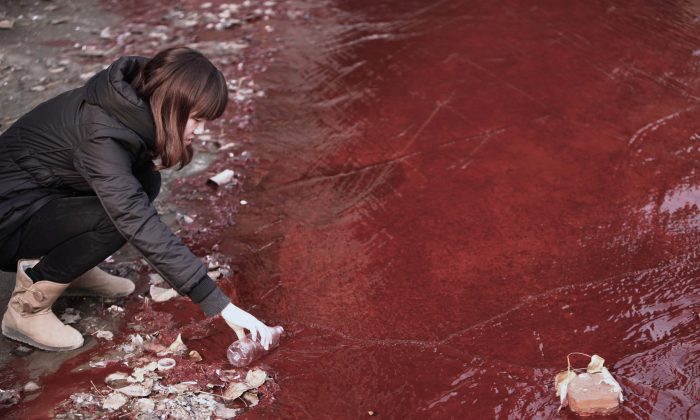 A woman collects a sample of the red polluted water flowing from a sewer into the Jian River in Luoyang, in central China's Henan Province, on Dec. 13, 2011. Pollution from a medicine factory in Daliuying Village in Henan Province creates a sour smell in the air, and makes underground water salty and unclear, state news media recently reported. (STR/AFP/Getty Images)
China

All windows and doors are kept closed shut all day and all night in Daliuying Village in central China’s Henan Province. The acidity in the air is so terrible, it’s the least people can do to avoid the smell.

The drinking water seems even worse and looks like starch. The river has a reddish-yellow color. The source of the pollution is a medicine factory a mile away from Daliuying.

Living here is very depressing… We don’t dare go out because of the smell. When I do go out I can’t keep my eyes open.
— Chinese villager, Henan Province

“Living here is very depressing. There’s pollution here from morning to night. We don’t dare go out because of the smell. When I do go out, I can’t keep my eyes open,” a resident in Daliuying Village in a suburb of Nanyang City in Henan Province told state-run China Central Television (CCTV).

Many pregnant women have decided to leave the village until their babies are born, CCTV reported.

Local people have relied on ground water since ancient times, but no one dares to drink it any more. Villagers say the water tastes salty. CCTV footage shows that when a villager boils some water from a well, oil floats on the surface, and some white, starch-like substance precipitates.

No one dares to touch the water in the river running through the village any more either, because many villagers have developed rashes that are intolerably itchy after touching the river, CCTV reported.

The local agriculture industry has also been affected by the water pollution, producing lower quality and a decreasing amount of food every year, according to the CCTV report.

Many Chinese citizens have questioned the political background of the medicine factory, and condemn the local government’s inaction. “Such water should be supplied to the officials of the local environment department. See if they would drink it. The medicine factory must have a strong backstage supporter!” a netizen with username “Love and Rivers” remarked.

As the water and air pollution worsens in China, state departments and some state-run enterprises are running their own farms to provide officials with “special food supplies.” But considering how pollution spreads, the quality of such sources of food could also be questionable.