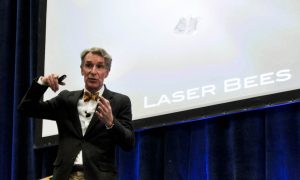 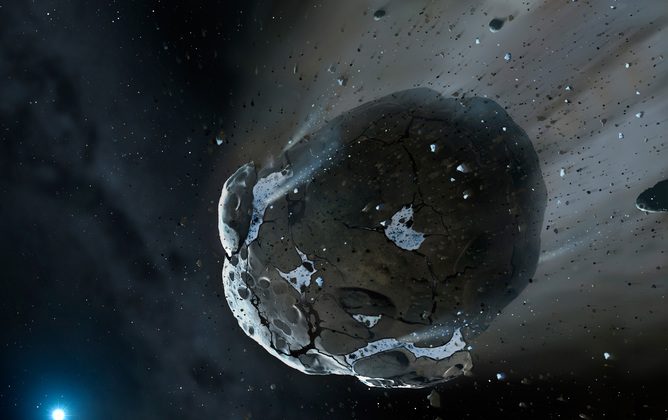 Artist’s view of a watery asteroid heading to a white dwarf star. (ESA/Hubble, CC BY)
Science

Astronomers have discovered a white dwarf star with a polluted atmosphere that may shed light on where the water on Earth comes from and how much water there is outside our own solar system.

A major question in planetary science is whether the water on Earth was already present in the primordial material that formed our planet or whether it was planted here by collisions with bodies such as asteroids, comets and proto-planets.

Oxygen in the Atmospere

New research by a team of British and German astronomers suggests that water delivery by collision may be common in other star systems outside our solar system. They came to this conclusion by measuring the chemical composition of the atmosphere of a white dwarf star, dubbed SDSS J1242.

White dwarfs are essentially corpses of former stars. Most low or medium-sized suns will become white dwarfs at the end of their lifetime. The strong surface gravity within these stars causes heavier elements, such as carbon and oxygen, to sink to their centres, leaving simple atmospheres of hydrogen and helium.

The atmosphere of SDSS J1242 is dominated by helium but the researchers also found large amounts of oxygen and hydrogen, along with rock-forming elements magnesium, silicon and iron.

The new measurements suggest SDSS J1242 has accreted at least an exatonne (which is about 1018 tonnes) of material in its life time – similar to the mass of the dwarf planet Ceres in our solar system. This has happened at a mind-boggling rate of of 20,000 tonnes per second, which is higher than for any other known metal-polluted white dwarf. The large amount of oxygen suggests that nearly 40% of the mass of the planetary debris is water – possibly in the form of ice delivered by a water-rich asteroid.

A similar mechanism has been suggested for the origin of oceans on Earth. Four billion years ago, the Earth and other rocky planets are thought to have been bombarded by comets and asteroids, which were scattered from the asteroid belts into the path of the inner planets as the gas giants migrated outwards, delivering water and possibly the complex organic molecules that provided the building blocks of life.

Comets are known to contain water and, for some time, seemed the most promising candidates for transferring water to Earth. However, a growing body of measurements has suggested the water in comets are of a different kind to that found on Earth. This is because water on comets contain more deuterium – a heavy isotope of hydrogen – than water on Earth.

The record holder was the water in comet 67P/Churyumov–Gerasimenko, measured by the Rosetta spacecraft in 2014, which has a deuterium level 3.4 times higher than that of water on Earth. Researchers therefore now pin their hopes on asteroids. While they are today dry, barren objects, they have a similar chemistry to the Earth and may have contained much more water when the solar system formed.

The discovery of asteroid-donated water in white dwarf SDSS J1242 appears to add weight to the hypothesis. But, as the authors of this study emphasise, if the amount of carbon in J1242 turns out to be the same as that in our sun, all of the oxygen detected could have been delivered in the form of carbon dioxide rather than water. While the authors argue this is unlikely, higher quality observations at optical and ultraviolet wavelengths could provide a definitive answer.

Future observations of other planetary systems and more detailed study of polluted white dwarfs will be important in establishing the role of asteroids as a source of water – and perhaps life – on Earth and other worlds.

Carole Mundell is Head of Astrophysics at University of Bath. This article was originally published on The Conversation. Read the original article.