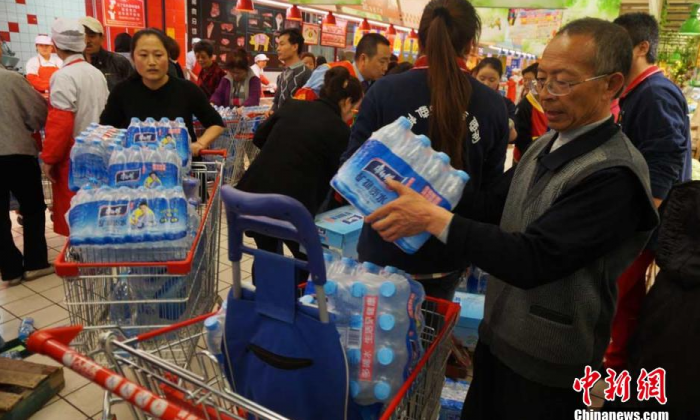 Citizens carry bottled water out of a supermarket in Lanzhou, northwest China's Gansu Province, on April 11, 2014, after tap water in a Lanzhou was found to contain excessive levels of the toxic chemical benzene. (STR/AFP/Getty Images)
China

Four days after a cancer-causing chemical was discovered in the drinking water of the northwestern Chinese city of Lanzhou, local officials on Monday said that everything was under control. Residents, however, remain deeply suspicious.

“The anxiety and fear is tormenting me,” said one resident in an interview with the Chinese business magazine Caixin.

The water, polluted with benzene, a petrochemical that can cause cancer and chromosomal damage for humans exposed to it, has caused chaos in the city of 3.6 million. Lanzhou residents stormed supermarkets, buying up all the bottled water over the last few days. Water has been trucked in from elsewhere.

Local officials shut off water to one district in the city on April 11, the day after they discovered the benzene contamination. A test showed that there were 201 micrograms of benzene per liter in Lanzhou’s drinking water, far exceeding the state-set safety limit of 10 micrograms per liter.

Residents had been complaining about a strong smell and irritating taste to the water since early March.

Confounding the matter was the result of a regular test last month by the city’s only water company, Lanzhou Veolia Water Company that showed “the city’s water quality reaches full compliance, and is safe to drink,” according to the official Lanzhou Daily.

The only reason that benzene was detected in April, it seems, was because of a project launched by the Lanzhou government this year, which required a thorough water test, according to China Central Television.

The Chinese Academy of Sciences got involved in that test, and discovered the benzene.

In its defense, Lanzhou Veolia said that it found nothing because it wasn’t equipped to detect benzene. Only national institutions can do that, it said. Its next scheduled test would have been in September.

This sparked more anger and feelings of insecurity by local residents. Many took to the Internet to express shock that the tests were only conducted twice a year, and that the local water company could not even detect benzene.

Many Internet users wrote: “How long have we been drinking polluted water?” and “Who should be responsible for it?”

The Lanzhou Veolia Water Company didn’t cut off water supply for 18 hours after the pollution was detected, according to the official announcement. This fact has attracted angry public complaints.

Tian Huaqiang, the director of public relations at the Veolia Water Company, said it was because the benzene test process is complicated and takes a long time, according to China Youth Daily.

Five local residents attempted to bring a lawsuit against the company in the Lanzhou Intermediate Court Monday, accusing Veolia Water of harming the public’s interest by not immediately stopping the unsafe water supply. They also demanded financial compensation and a public apology, according to the Chinese newspaper 21st Century Business Herald. http://3g.k.sohu.com/t/n17758110

The court rejected the complaint, saying that the individuals were not qualified to sue.

Professor of Chinese law, Xu Xin, wrote on Sina Weibo that the court rejection itself was unlawful. “As long as the plaintiffs drank the polluted water, they are direct victims of the case, and the court should accept their complaint. The court is violating the law for not accepting citizens’ civil action,” Xu wrote.

Preliminary reports indicate that pollution from facilities owned by China National Petroleum Corporation, a state-run oil giant, are likely behind the benzene contamination.