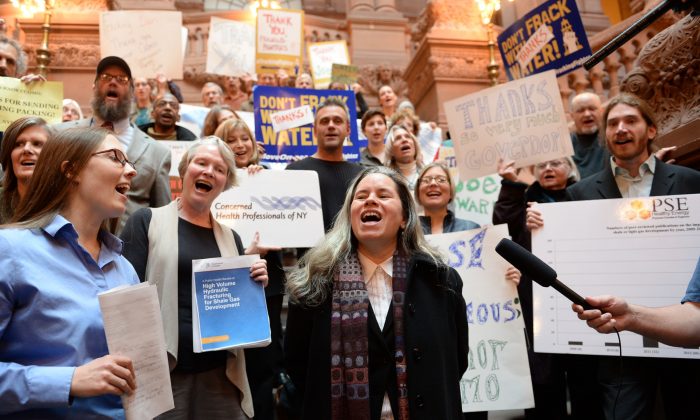 Singer Natalie Merchant leads a group of anti-fracking activists in a rendition of Pete Seeger's "This Land is Our Land" during an event at the New York State Capitol building in Albany, N.Y., on Thursday, to thank Gov. Andrew Cuomo for the ban on high-volume hydraulic fracturing. (AP Photo/The Daily Gazette, Patrick Dodson)
New York

ALBANY, N.Y.—New York Gov. Andrew Cuomo is getting heaped with praise by environmentalists and scorn by business interests for a planned state ban on hydraulic fracturing for natural gas, even as he insists the decision wasn’t his.

Quinnipiac University Poll assistant director Mickey Carroll said the political impact is likely to be limited and the decision was predictable.

“One area where it’s going to hurt old Andrew is in the Southern Tier. They wanted the money,” Carroll said. “Andrew Cuomo, for all the baloney that’s written about him, is a liberal Democrat.”

Marist Poll’s Lee Miringoff said the decision plays well toward a national Democratic constituency, if that was part of any calculation.

“Whether Cuomo is keeping an eye to that or not, it’s anybody’s guess,” Miringoff said. “But certainly if you ever are considering taking the show on the road, you want to be on the side of fracking that he’s on for Democrats.”

Following his pledge again Wednesday to defer to experts on “this highly technical question,” his health and conservation commissioners described analyses that identified contamination threats to water, soil and air, the absence of reliable health studies or proof that drillers can protect the public, as well as diminishing economic prospects.

“The time to do it is when gas prices are plummeting,” Miringoff noted. “In the short term, this cushions the blow.”

Conservation Commissioner Joe Martens said he’ll issue the ban early next year. He said 63 percent of the state’s 12 million acres with these possible gas deposits would already be off-limits because of protections for the New York City and Syracuse watersheds, other drinking water sources, and certain other areas, while court rulings have recognized towns’ authority to individually ban hydrofracking through zoning, further limiting financial prospects.

Acting Health Commissioner Dr. Howard Zucker said 4,500 staff hours were spent reviewing health studies about the drilling method of extracting oil and gas from deep underground by pumping huge amounts of water, sand, and chemicals at high pressures to break up rock formations. It’s being done in many other states, including neighboring Pennsylvania.

Zucker said his counterparts in several other states told him they were not consulted before their high-volume hydraulic fracturing began. He said he wouldn’t want his family to live near it, and suggested it could be like secondhand smoke, which studies eventually identified as harmful.

Cuomo was asked about the decision again on Thursday.

Siena Research Institute’s Steve Greenberg said only Cuomo himself can answer whether it was a political decision. He said if there was an advantage, it would have been in the fall when the governor was having trouble with the left side of the Democratic Party, making it easier for him to say now it was apolitical.