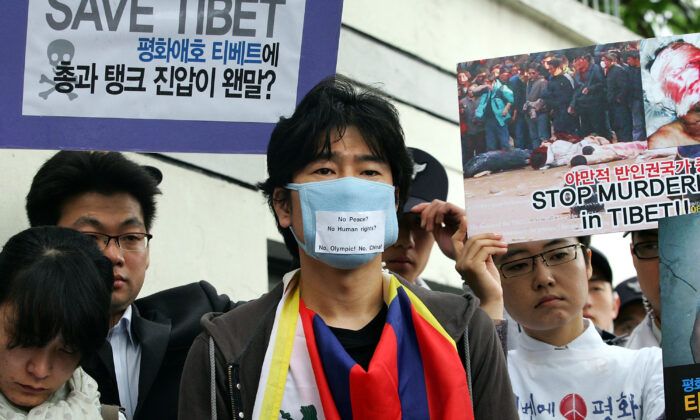 Protesters participate in a pro-Tibet rally in front of the Chinese embassy In Seoul, South Korea, on April 29, 2008. (Chung Sung-Jun/Getty Images)
Asia & Pacific

South Korea’s global think tank, East Asia Institute (EAI), and Japanese non-profit think tank, Genron NPO, conducted a mutual perception surveys with 1,000 nationals from South Korea and Japan each year since 2013. On Sept. 28, 2021, the ninth year, the two organizations released a joint public opinion poll conducted from August to September of 2021. The results showed that 73.8 percent of South Koreans had an unfavorable view of China (the CCP). It was 59.4 percent last year and 51.5 percent the year before. The proportion of people who have a favorable view of the CCP is only 10.7 percent, the lowest since 2013.

When participants were asked about the reasons for the negative perception toward the CCP, the top reason was “China’s coercive actions such as THAAD retaliation,” accounting for 65.2 percent; followed by “China does not respect Korea,” accounting for 43.8 percent.

THAAD is a U.S.-designed and manufactured anti-missile system installed in South Korea between 2016 and 2017 to defend against North Korea’s nuclear missile threats. However, the CCP has insisted that the deployment of THAAD affects China’s security and has since adopted a series of countermeasures against South Korea.

The proportion of South Korean respondents who view China (the CCP) as a military threat increased from 44.3 percent last year to 61.8 percent this year, increasing 17.5 percent.

Anti-Japan Sentiment on the Decline

South Koreans also show concerns about the human rights issues in China. Sixty-one percent of South Koreans believe that there should be tough measures against the CCP’s violation of human rights.

In mid-June, the Korean weekly current affairs magazine “Sisa IN” and the pollster Hankook Research conducted an online survey on why and how much Koreans dislike China (the CCP). The results show that Koreans generally have a negative view of the CCP both on the left and the right, breaking the old formula of “pro-China on the left, anti-China on the right.” In the survey, 58.1 percent of the respondents think the CCP is close to “evil,” while only 4.5 percent think the CCP is close to “good.”

The percentage of those who think negatively about the CCP is 75.9 percent, surpassing previous negative poll responses toward Japan at 71.9 percent.

Japan had been South Koreans’ least liked country due to Japan’s occupation of Korea in the early 1900s. However, this year’s survey results show a different story.

In addition, according to a new poll from the Pew Research Center, a U.S. think tank, released on June 30, unfavorable views of China hover near historic highs in most of the 17 advanced economies surveyed. Among the 17 advanced economies surveyed, 69 percent of the respondents had a negative view of the CCP. In North America, 76 percent and 73 percent of respondents in the United States and Canada have negative views of the CCP, respectively.

The average rate of negative views of the CCP in Europe is 66 percent, and 73 percent in the Asia-Pacific region; 88 percent in Japan, 80 percent in Sweden, 78 percent in Australia, and 77 percent in South Korea.

The survey also shows that in the United States, 90 percent of respondents believe that Beijing does not respect individual liberties; 95 percent in Sweden, 92 percent in South Korea, 91 percent in Australia and the Netherlands, and 83 percent in Taiwan.