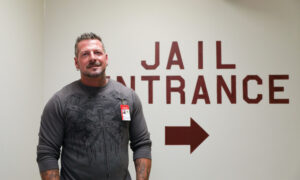 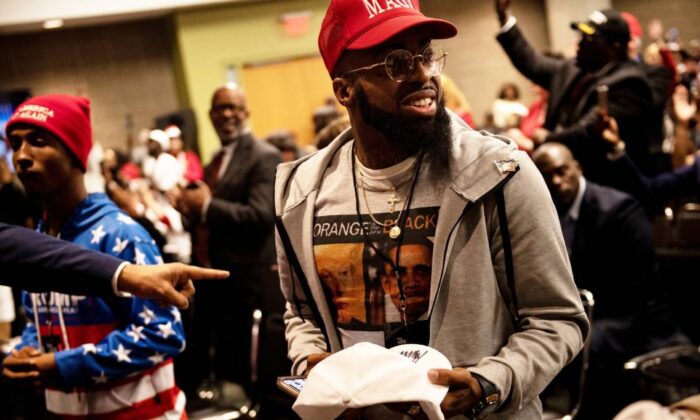 People wait for President Donald Trump during a rally at the Georgia World Congress Center in Atlanta, Ga., on Nov. 8, 2019. (Brendan Smialowski/AFP via Getty Images)
Politics

Democrats have relied on President Franklin D. Roosevelt’s coalition to control the White House and Congress for much of the past eight decades, with black voters being the most reliable bloc in the alliance.

But three recent national polls may signal big changes ahead in America’s political balance of power.

Rasmussen Reports announced Nov. 22 that 34 percent of blacks in the latest survey said they now support President Donald Trump. Shortly thereafter, Emerson Polling said it found that 34.5 percent of blacks back the president.

Since only 8 percent of black voters supported Trump in the 2016 election, such a shift in the Democratic Party’s most loyal constituency quickly sparked glee among conservative commentators and derisive outrage among liberals.

But then the latest Marist poll showed 33.5 percent of “non-whites,” including both blacks and Hispanics, were in favor of the president.

In fact, growing support among blacks for Trump is not a new thing. When Kanye West met with Trump in the Oval Office in 2018 and proclaimed his enthusiasm for the president, Hoover Institution professor Victor Davis Hanson described the potential for a shift in black electoral allegiance:

Democratic strategist Robin Biro also saw a threat, telling The Epoch Times on Dec. 2 that he was initially “a little leery” of the Rasmussen numbers, until he read the polling numbers from the Marist Poll.

Biro, a U.S. Army Airborne Ranger veteran and former regional field director for President Barack Obama, recalled the Trump–West Oval Office confab, saying, “While my peers on my side of the aisle were having a good time poking fun at Trump for meeting with Kim Kardashian, I was concerned because she and Kanye West have a vast sphere of influence.”

Biro credited Trump for planting seeds with black voters and warned that the three polls “should serve as a cautionary tale to my Democratic peers to not take anything for granted in politics, be it wild celebrity endorsements, meetings, etc.—this is not your grandfather’s game of politics.”

“There has not been nearly enough said on the Democratic presidential debate stages about what we plan to do to help communities of color, and the frustrations are palpable among these communities for that,” he said.

Other Democratic campaign strategists interviewed by The Epoch Times, however, were less pessimistic about the three polls.

“As is so often the case with polls President Trump likes, the Rasmussen and Emerson results appear to be outliers. For example, the straight-down-the-middle Gallup poll finds black support statistically unchanged over the past three years: 10 percent in 2017, 11 percent in 2018, and 10 percent so far this year (to Nov. 20),” Critchley said.

Critchley also cited GOP pollster Frank Luntz’s warning that a week before the 2018 elections, Rasmussen showed 40 percent of blacks going with Trump, but then only 8 percent voted Republican.

Jim Manley, former Senate Majority Leader Harry Reid’s (D-Nev.) communications director, told The Epoch Times that he sees nothing in the three polls to warrant a particular response from Democrats.

“Look, we as a party can’t afford to take anyone for granted this cycle, but, given the economy is doing okay, it’s kind of surprising that [Trump] hasn’t been able to pick up additional support from the African American community. He can’t pull it off because most of them see right through his cheap talk and Kanye-type moments,” he said.

Enthusiasm about the polls remains strong among Republicans. Jennilee Brown, vice president for operations at California-based Thomas Partners Strategies, told The Epoch Times on Dec. 2 the leftward surge among Democratic presidential candidates may account for more blacks moving to Trump.

“I don’t anticipate Trump will win the majority of African American and minority support,” Brown said, “but even small gains spell trouble for the fractured Democrat field that’s moving further to the left. African American voters are no longer the furthest left among Democrats, which could be why the 2020 candidates’ economic message is overreaching with this group.”

Similarly, Kevin Sheridan, a Washington-based strategist who was a senior adviser to Mitt Romney’s 2012 presidential campaign, told The Epoch Times on Dec. 2 that increased black support is especially key in battleground states such as Pennsylvania and Ohio.

“You can’t fall off the floor. Republican nominees have been rock-bottom for 30 years with African Americans, so any bump in those numbers makes battleground states look better for Trump,” Sheridan said.

“If Democrats nominate a Liz Warren or Pete Buttigieg, they are signing away the Obama coalition. Hillary could barely build a crowd with Jay Z and Beyonce.”

“Democrats have long made it clear they vote with the teachers unions, not with parents … not families hoping for paved streets, low crime, and good schools.”

“I think a lot of this is attributable to Trump’s insistence on breaking Republican orthodoxies of the last three decades,” he said.

“At the same time that he is breaking the mold on issues like sentencing reform, trade, and aid to historically black colleges and universities, he is presiding over an economy that just plain works well for minority communities.”