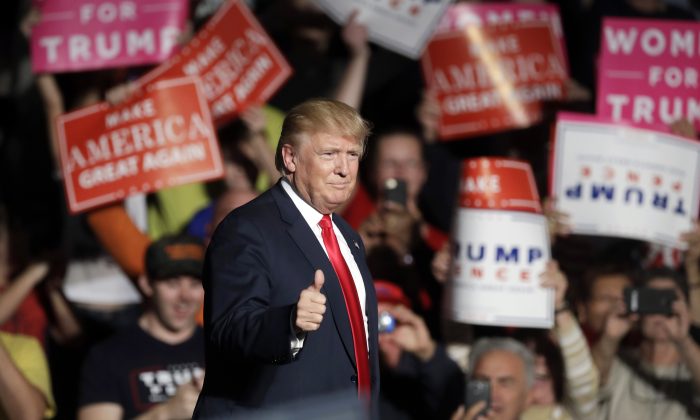 Polls Show Trump Catching Up to Clinton in NH

Several polls are showing that Donald Trump is leading Hillary Clinton in New Hampshire, where the former secretary of state has never been behind.

In one—the American Research Group poll—found that Trump is leading Clinton 48 percent to 43 percent among likely voters in New Hampshire. “The following results are based on 600 completed interviews among a statewide random sample of likely voters in New Hampshire (209 Republicans, 191 Democrats, and 200 undeclared voters). The interviews were conducted October 31 through November 2, 2016,” the American Research Group stipulates.

And a WBUR-FM/Mass Inc. poll shows Trump leading Clinton 40 percent to 39 percent. He’s ahead in a Suffolk University/Boston Globe poll 42.2 percent to Clinton’s 41.8 percent. They’re both within the 4.4-point margin of error.

Clinton was up as many as 15 points in October in polls last month, reported USA Today.

Julie McClain, the communications director for Clinton’s campaign in New Hampshire, told the newspaper that the campaign isn’t nervous.

“Polls always tighten in New Hampshire around election day,” she said while adding they are putting in “mammoth” efforts in the Granite State.

She added: “I think we’re all feeling like this is what we knew would happen.”

A RealClearPolitics average shows Clinton is up 0.8 percent over Trump in the state.

The poll results seem to tie in with FBI director James Comey’s announcement that the agency will re-open an investigation into Clinton’s email server.

On Thursday, a New York Times/CBS poll found that Clinton is still leading over Trump nationally. Around 45 percent of voters are supporting Clinton, while 42 percent of respondents support Trump in the new poll.