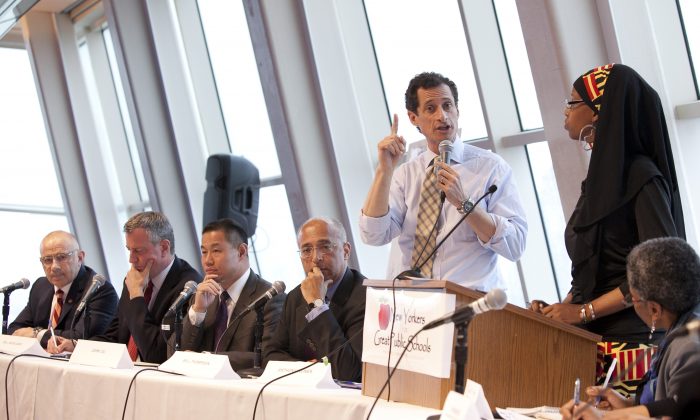 NEW YORK—In the hotly contested New York City mayoral race it is anyone’s guess who will win when voters head to the polls on November 5. The numbers from the latest polls released Tuesday, June 25 show no candidate winning over 30 percent of those polled.

“The polls are telling you right now there is a very high likelihood of a runoff,” said Steven Malanga, senior fellow at the Manhattan Institute for policy, a non-partisan policy think tank. “It also suggests voters may not be enthusiastic about the general election because they are not enthusiastic at this point about any one candidate. The fact that no candidate can even get near 40 percent tells you it is like a coin toss.”

For the first time during this election, the poll showed Democratic candidate and current City Council Speaker Christine Quinn losing the top spot, garnering only 20 percent support, to former congressman Anthony Weiner’s 25 percent. Most recently, Weiner was U.S. representative for New York from 1999 to 2011. Prior to that he was a New York city councilor. He is also the newest addition to the crowded 2013 mayoral candidate’s field.

A Quinnipac University poll released Wednesday afternoon found the three leading Democrats in a statistical tie, with Quinn at 19 percent, Weiner at 17 percent, and Thompson at 16 percent.

“In many ways,” Weiner said of the Tuesday poll, “it doesn’t change anything.

“We’re going to keep talking about ideas for the middle class and those struggling to make it and certainly it does seem … that people are responding.”

“But we are confident that on election day when voters have to decide who they want to lead this city, they will choose someone who has demonstrated the ability to lead and deliver,” he said.

With the primaries not until September 10, Malanga said it was still early to draw a conclusion as to who would win based on these polls, but he said the polls showed how voters feel about the field.

“The fact that none of the candidates in the Democratic primary have been able to gain any momentum—and in fact with several of them losing momentum—it does suggest this is not considered, by the average voter to be a very impressive field,” Malanga said.

He said the numbers suggest how New Yorkers feel about their elected in city government. This year’s field is full of either former or current politicians—however, New York has not elected a local politician since David Dinkins in 1990. Dinkins was Manhattan Borough president before becoming mayor.

“New York city is not very impressed by their city officials,” Malanga said.

Conducted by Wall Street Journal, NBC New York, and Marist, the poll released Tuesday evening heard from 689 Democrats among 1,118 registered New York City voters overall from June 17 to June 21. It has a margin of error of plus or minus 2.9 percentage points. The poll results went viral.