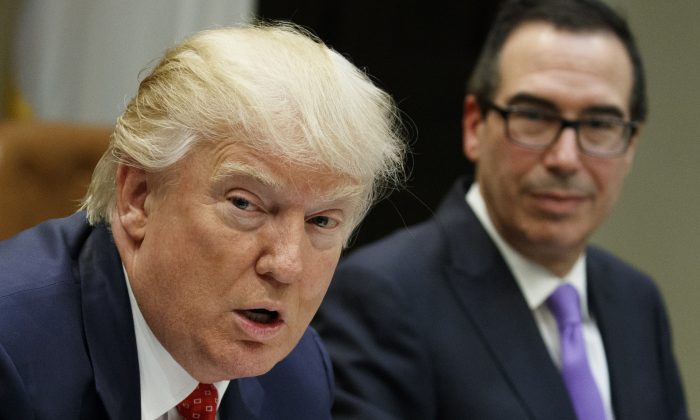 Treasury Secretary Steven Mnuchin listens at right as President Donald Trump speaks during a meeting on the Federal budget in the Roosevelt Room of the White House in Washington on Feb. 22, 2017. (AP Photo/Evan Vucci)
US

A new poll has found that 42 percent of Americans believe that the country is heading in the “right direction,” up 15 percent from last year.

A new Rasmussen Reports poll, which surveyed people via telephone and online, also found that 53 percent thought the United States is on the “wrong track,” down 14 percent from the same time last year.

The poll surveyed 2,500 likely voters from March 5 to March 9, and has a margin of error of 2 percentage points and a 95 percent level of confidence.

A separate poll, conducted via Gallup, shows that while President Donald Trump’s approval rating is relatively low, a majority in the United States—or 54 percent—believe that Trump will do a “good job” and “make America prosperous.” Gallup noted that in the final years of former Presidents Barack Obama and George W. Bush, only 45 percent (down 16 percentage points from his first year in office) and 27 percent (down 39 percentage points) of respondents, respectively, believe that they were “making America prosperous.”

Gallup, meanwhile, found a deep “gulf between Republicans and Democrats” in how they view Trump’s presidency, as compared with Bush or Obama during their first weeks in office.

The gulf—and overall lower public perception of Trump—as compared with his predecessors, could be the result of unremitting negative media coverage.

The Media Research Center, or MRC, discovered that ABC, NBC, and CBS demonstrated overwhelmingly negative coverage of Trump right after his inauguration. In the study, their evening newscasts dedicated 54 percent of their total news coverage, or 16 hours, to Trump during his first 30 days in office. Of that, there were 674 negative statements about Trump, while a mere 88 statements were deemed positive. Also, nonpartisan group Media Tenor discovered that only 3 percent of network news stories were positive in their reporting on Trump’s first month in office.

In comparison, a previous survey from Pew found that Obama got much more positive media coverage in his first 100 days than predecessor Bush, former President Bill Clinton, and likely, Trump.