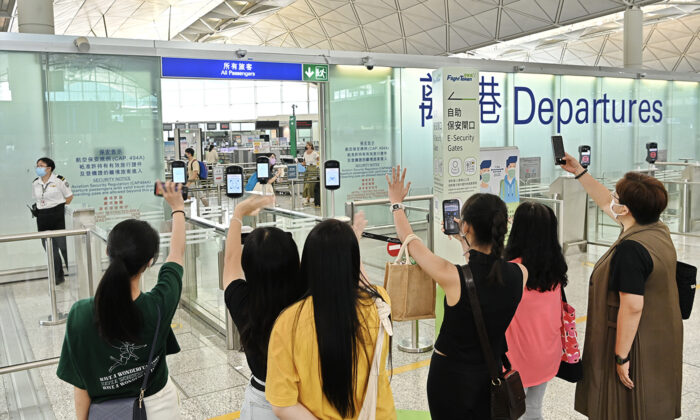 Polls Indicate a Decline in Those Interested in Leaving Hong Kong; Scholar Challenges the Result of Survey

However, a recent poll by Hong Kong Public Opinion Research Institute announced that, compared with the March survey, fewer people planned to leave and more intended to stay.

Critics challenged the feasibility of conducting polls in the present menacing political environment. “How do you convince the public that the interviewees indeed gave genuine answers?” said Benson Wong Wai-kwok, a commentator and freelance writer. He regarded the resulting statistics as not necessarily reflecting reality.

The survey was conducted by online questionnaire from July 11 to 16, to which 6,897 Hong Kong residents responded, a majority of them declaring themselves as democrat supporters.

Nineteen percent of them replied they had plans to leave Hong Kong permanently, 5 percent less than in March, while 73 percent replied they had no such plan, 8 percent more than in the last survey. Fewer people were uncertain it seemed, with 4 percent less of respondents saying: “Not sure/Hard to say.”

A total of 5,577 respondents identified themselves as supporters of “Democrats.” 57 percent of them had no plan to leave Hong Kong permanently, 5 percent more than in the last survey.

As to participants who supported “Non-democrats,” 13 percent planned to leave permanently, 4 percent less than in the last survey. 81 percent had no plan to leave, a 7 percent rise.

It is worth noting that half of the “Non-democrats” supporters had no plan to leave and “will not leave under any condition,” representing an 11 percent surge.

Wong suggested three questions in analyzing the findings: whether schools have hired enough teachers by the end of August when the new semester is about to start; whether Band 1 (top tier) schools need to recruit students from Band 2 or 3 schools to “fill up the class;” whether Hong Kong residents notice relatives and friends leaving.

Earlier there were news stories that at least 200 secondary and primary schools, 18 percent of the total number, were still in the process of hiring teachers around the end of July and early August. Although the Education Bureau admitted that the turnover rate was “a bit high,” it kept saying there were still sufficient qualified teachers to do the job.

Also, the number of students was decreasing. According to the “Report on Student Enrollment Statistics,” released in September 2021 when the new semester kicked off, the student population was 25,000 down from the previous year.

Many schools failed to recruit enough students. Some secondary schools tried to attract more enrollees with the gift of an iPad.

Wong Kin-ho, chair of the Hong Kong Federation of Education Workers even suggested the Bureau be tough on some schools by executing class cuts in order to protect other schools.

Hong Kong Secondary School Council and the 18 District Secondary School Principals Association jointly wrote a letter to the Secretary for Education Mrs. Choi Ruo-lin saying “ the current situation for education is grave.” They were distraught that the drop in student population will bring great turmoil to the education sector.

They urged the government to take practical actions without delay. It was further suggested that the Bureau maintain the approved number of classes, adjust the number of allocations per class according to the population fluctuation, and carry out measures such as curriculum reform.

Chief Executive John Lee, when interviewed by the Hong Kong Economic Journal some time ago, rejected the term “Emigration tide” to describe the net outflow of 300,000 people through the Hong Kong airport. Instead, he said the “in and out” had been quite common for Hong Kong as an open city. While there were more people in and out than ever, Lee said it was because there was a “seize for talent” throughout the world, hence the leaving of some people was “understandable.”

Retired media celebrity Luke Tsang Chee-wah in his Facebook post quoted a source that Communist China’s Premier Li Keqiang “issued an order in Shenzhen to Hong Kong’s government officials that Hong Kong must at all cost maintain its essential task of producing golden eggs (as an international financial centre) and put a sharp stop to the emigration tide.”

Li Keqiang was on an inspection tour in Shenzhen recently. He also chaired a forum of governors from the six major provinces essential to the economy. When he met the new Chief Executive John Lee on May 30, he expressed a wish to see the new government reinforce and even build a stronger Hong Kong’s status as the centre of international finance, trade and shipping.

Current affairs commentator Martin Oei in his channel programme disputed that Li Keqiang “failed to persuade Hongkongers to stay.” To stop the emigration tide “the one and the only way to restore democracy is to,” rescind the national security law, revoke all political prosecution, implement universal suffrage for the Chief Executive and the Legislative Council, grant amnesty to all convicted in relation to the anti-extradition movement in 2019. Otherwise, more and more Hong Kong people will be leaving, Wong said.