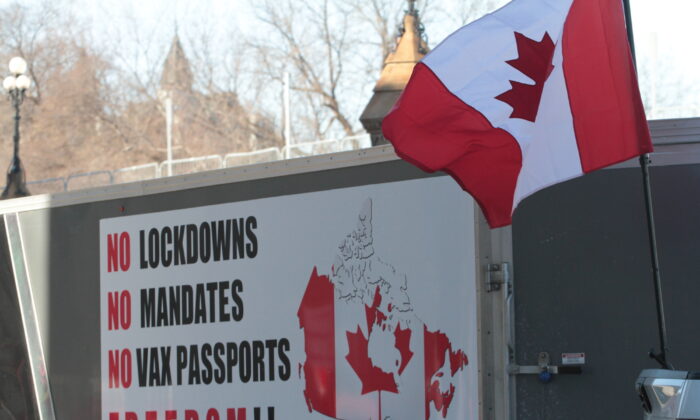 A Canadian flag flutters next to a sign on a truck in the centre of Ottawa on Feb. 12. (Richard Moore/The Epoch Times)
Viewpoints

Two stories broke this week, one on each side of the country, that seem to me to cast an interesting light on one another.

In the first, three members of the radically “woke” San Francisco school board were recalled by over 70 per cent of the vote in what is perhaps the most progressive jurisdiction in the country.

In the second, the results were published of an opinion poll of residents of the District of Columbia, where the progressive city government has just removed many of its own draconian COVID restrictions, some of which were imposed only last month. The poll revealed that nearly three-quarters of those who responded wished for the restrictions to be left in place.

Given that both sides agree that a major reason for the recall of the radical school board members was their long-standing refusal to re-open San Franscisco schools and lift COVID restrictions; and given, also, the extent to which the left–right division in the country just now appears to fall between those who are pro and anti such restrictions, how do we account for similar majorities on the two progressive coasts against and for their respective COVID-autocracies?

I think the answer has something to tell us about the unreliability of public opinion polling, especially since the dawn of the Trump era.

Remember the embarrassment the pollsters suffered when President Donald Trump was elected in 2016? At the time, some analysts put their errors down to “shy Republicans”—who had shown up in the British election a year earlier as “shy Tories”—who were for some reason more reluctant than Democrats or Labour supporters to tell pollsters their real voting intentions.

Lots of other people—whether they were preponderantly Republicans or Democrats nobody knows—refused to speak to pollsters at all, whether about their voting intentions or about anything else.

Pollsters, like the media, thus found themselves transformed from observers to participants in the things they were supposed to be reporting on—except that they mostly didn’t think it worth reporting that polling itself was polling very badly.

And they continued to believe in what could only have been their inaccurate results, derived from the views of the highly selective rump of the public who were still willing to speak to them, because they wanted to believe them.

Such reluctance to be polled on the part of so many is what you might expect if people thought that pollsters were agents of the media—which they mostly are—coupled with the fact that the media had been telling them for months that Trump was something pretty close to the devil incarnate.

Even if you didn’t believe that yourself, you probably weren’t going to want to tell that to a stranger, especially to a stranger who you believed was going to put you down in his little black book, anonymously or otherwise, as someone no better than a Satan-worshiper.

Something similar happened four years later, during the first year of the COVID emergency, when those who questioned the need for such draconian countermeasures as lockdowns and masks and school closings were seen by the authoritarian left as politically motivated and uncaring about the lives that they professed to believe would inevitably be lost as a result.

This might have had something to do with the fact that the left and their media allies were profiting from those countermeasures, both by the expansion of big government regulatory authority and by the re-writing of many states’ election laws to make that year’s election less secure.

That could also be why the scientists who originated the 2020 Great Barrington Declaration, since endorsed by nearly a million people, advocating a cautious re-opening of the economy and of social life, were traduced, in the words of Dr. Francis Collins, then head of the National Institutes of Health, as “three fringe epidemiologists” who were allegedly endangering the lives of the most vulnerable.

Most of the media simply ignored the Great Barrington scientists. They could afford to do so because their campaign of fear through months of threatening people with the spectre of certain death if they went out without their masks or declined to maintain social distancing had been so successful.

Didn’t everybody know that these things were life-savers? And therefore weren’t those who opposed them bound to be endangering lives?

The public’s weariness with the long disruption to normal life was palpable even then, yet opinion polls showed that clear majorities of people were opposed to any return of their own freedoms so long as the pandemic was still at large.

This of course made it easy for the media to do again what they had already done during the 2016 election campaign. More or less en masse they seconded the view of the militant left that those who didn’t agree with them about the wickedness and hard-heartedness of their latest hate-figures—Donald Trump then, the Great Barrington scientists now—were themselves part of “a basket of deplorables” and therefore regarded by at least some of their neighbors as lacking in basic human decency. They must have wanted people to die.

As we can see from the vitriol being poured out against the Canadian truckers—apparently to be considered as the latest emissaries of the Evil One—this is still the view of the left and of the media, so it is not too surprising that a large majority of D.C. residents are declining to identify themselves as belonging to the party of the deplorables, at least when they’re invited to do so by a pollster.

But there’s some reason for thinking that the private opinions of at least some of them differ from what they’re prepared to tell an anonymous caller on the other end of a telephone line.

Both London Breed and Muriel Bowser, for instance, mayors of San Francisco and Washington, D.C., respectively, have dared to one extent or another to take the side of those who advocate a loosening of government restrictions on people’s freedoms and everyday lives.

Whatever their ideological coloring, they’re practical politicians who may be expected to have a better sense than the media’s of the way the political winds are blowing.

Their equally liberal counterparts in many American states, Canadian provinces, and even foreign countries have also been loosening restrictions in the last few days. One has the sense that the dam that has been holding back normality for nearly two years is finally breaking.

If so, however, we should expect the media and their favorite pollsters to be the last to know about it.