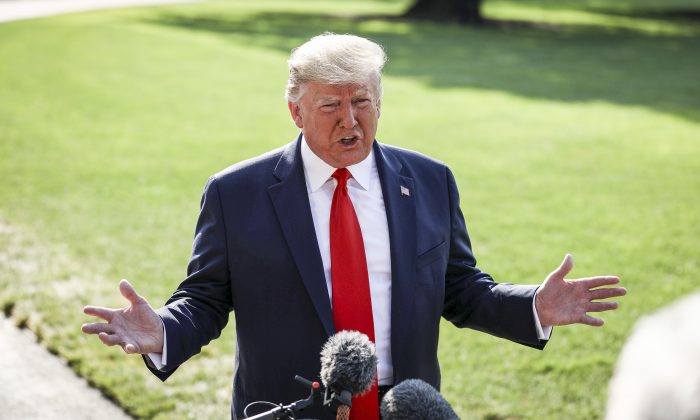 A poll from Rasmussen Reports on Sept. 25 and Sept. 26 found that 46 percent of likely U.S. voters think Trump will be reelected in 2020 rather than be defeated in the election or impeached.

According to the pollster, the percentage has remained unchanged from July.

The nationwide poll results, released on Friday, came after House Speaker Nancy Pelosi (D-Calif.) announced that the House would pursue an inquiry into impeaching the president. They have accused Trump of acting improperly during a phone call with Ukrainian President Volodymyr Zelensky when he asked about investigating former Vice President Joe Biden and his son, Hunter. Trump has denied any wrongdoing and said there has been no quid pro quo.

“Eighty-two percent of voters say they have been closely following recent news reports about Trump’s and Biden’s dealings with Ukrainian officials, with 55 pecent who have been following very closely,” Rasmussen also wrote of its findings.

The Rasmussen poll surveyed 1,000 likely voters with a 3 percent margin of error.

“It doesn’t matter,” Pelosi replied when asked by Texas Tribune CEO Evan Smith if she is worried about the Democrats’ ability to keep the House.

“And meanwhile, while all this is going on, all the money is being spent, all the hearings are being had—and I don’t mind investigation if there’s something really there. If there’s something really there obviously we’ve got to investigate. And we have been investigating but to go into a full-blown impeachment is going to accomplish, unfortunately, certain goals that I don’t think are desirable,” he added.

The country is already divided, he said, over a number of issues, including Trump.

But the impeachment efforts “is going to make it worse,” Van Drew noted.