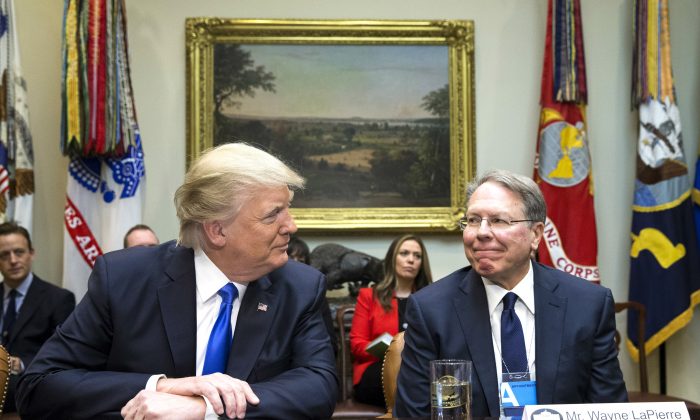 President Donald Trump (L), Executive Vice President and CEO of the National Rifle Association (NRA) Wayne LaPierre (R), and US Vice President Mike Pence (Back R) attend a meeting on Trump's nomination of Neil Gorsuch to the Supreme Court in the Roosevelt Room of the White House in Washington on Feb. 1, 2017. (Michael Reynolds - Pool/Getty Images)
Politics

President Donald Trump’s approval rating appears to be inching ever higher, according to a daily tracking poll.

Rasmussen Reports’ poll on Thursday, Feb. 2, shows that 53 percent of likely U.S. voters approve of his presidency so far, which comes a few days after him signing an executive order to temporarily bar citizens of seven countries as well as refugees from entering the United States for several months.

Another 47 percent of likely voters disapprove of the Trump is doing so far.

Meanwhile, “Americans are far more optimistic about their economic future since Trump’s election as president,” the poll stated.

Overall, 56 percent said they want the U.S. Congress, which is dominated by Republicans, to cooperate with the president as much as possible.

The daily tracking results are collected via phone of 500 likely voters each night, and it has a margin of error of 2.5 percentage points, with a 95 percent level of confidence.

Rasmussen Reports is considered a conservative leaning publication, founded by Scott Rasmussen. It founded its first polling firm in 1994. In 2008, according to Politico, “Rasmussen’s final poll of the 2008 general election—showing Obama defeating Arizona Sen. John McCain 52 percent to 46 percent—closely mirrored the election’s outcome.”