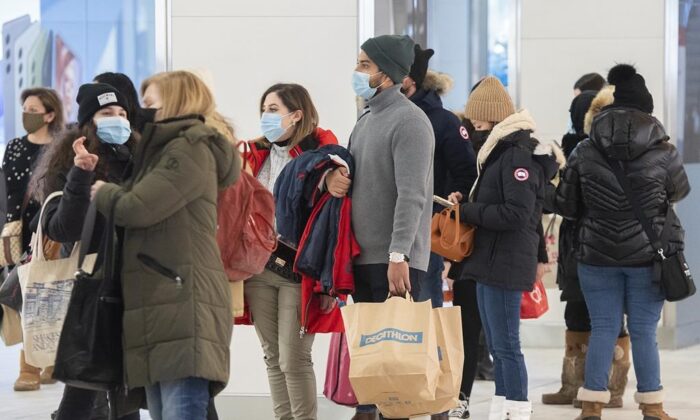 People wait in line to enter a clothing store in a shopping mall in Montreal, Jan. 15, 2022, as the COVID-19 pandemic continues in Canada. (The Canadian Press/Graham Hughes)
Canada

Poll Suggests Some Canadians Are Feeling Brighter About the Economy, Own Finances

OTTAWA—A new poll suggests some Canadians are feeling more upbeat about the state of the domestic economy and their own pocketbooks, though not quite as positive as they were before the COVID-19 pandemic.

The annual Leger survey of economic confidence found that nearly two in every five respondents rated the economy as being good or very good, which was up from the same survey last February.

Still, just over half of respondents weren’t as chipper on the state of the economy, with 54 percent rating it as poor or very poor.

That figure was a drop from the 61 percent of respondents in last year’s survey, but still above the 36 percent recorded in February 2020 just before the first wave of the pandemic.

About two-thirds of respondents also showed confidence in their personal finances, a figure that has remained steady through surveys in each of the previous two years.

The poll of 2,399 Canadians who took part in an online panel between Jan. 7 and 12 cannot be given a margin of error because internet panels are not considered to be truly random samples.

Christian Bourque, Leger’s executive vice-president, said the results suggest respondents are more optimistic about the economy than markets and economists who have downshifted expectations for the year. The poll indicates that optimism also extends to their personal finances despite high inflation rates.

“People feel a little bit more upbeat than one would have thought and it’s certainly an increase from what we saw over the past year in terms of overall optimism,” Bourque said.

Downgrading expectations comes on the back of signals from central banks on both sides of the border that their rock-bottom interest rates will go up this year to combat high inflation. There are also supply-chain problems and the spread of the Omicron variant that have created economic headwinds to kick-start 2022.

Canadians generally are fairly upbeat about the national economy, mixed with some level of prudence for what may come, which Bourque noted played out in regional results.

The biggest boost in optimism for the economy between last year and now came from respondents in Alberta. But the oil-producing province also had the largest percentage of respondents, at 61 percent, who had the least confidence in the economy.

“For Premier Kenney, it’s another ‘what do I do about this now?'” Bourque said. “Let alone management of the pandemic, now he has to face up to a population that feels that things are not going Alberta’s way.”

Among the top financial worries cited by respondents were the value of their investments, the safety of their savings, and being able to pay their bills.

Those were the same top issues in the poll done last February, although the results suggest fewer respondents were worried about those issues overall.