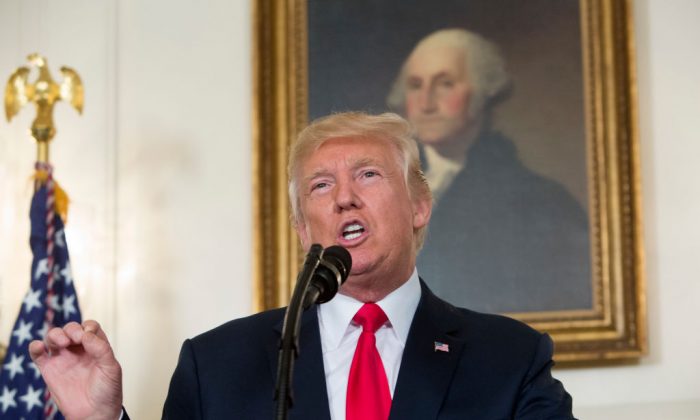 President Donald Trump at the White House in Washington on Aug. 14, 2017. (Chris Kleponis-Pool/Getty Images)
US

Poll Reveals Americans’ Opinions on Who Is to Blame for Charlottesville

A new poll released Thursday, Aug. 17 reveals how many Americans agree with President Donald Trump as to what caused the violent riots in Charlottesville, Virginia.

Trump has previously mentioned that “both sides” were to blame for the violence that occurred at a rally in Charlottesville protesting the removal of a Confederate statue of General Robert E. Lee. At the height of the violence, a white supremacist rammed his car into a crowd of people, killing a 32-year-old woman, Heather Hayer.

A SurveyMonkey poll conducted Thursday found that 40 percent of American adults believe that both groups of protesters were the most responsible for the violence in Charlottesville.

Nine percent blame the counter-protesters as the ones who are most responsible for the violence in Charlottesville.

Another 46 percent blamed “far-right groups” over the counter-protesters, the poll found.

The online poll surveyed 2,181 American respondents and revealed that:

Among independents, a total of 46 percent believes that both groups were most responsible for the violence, with 51 percent believing that white nationalists were the primary cause of violence.

Trump took to Twitter last week after he made updated remarks over the incident.

“Made additional remarks on Charlottesville and realize once again that the #Fake News Media will never be satisfied…truly bad people!” he tweeted.