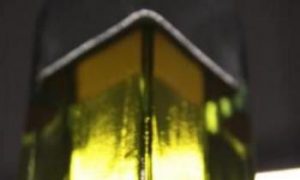 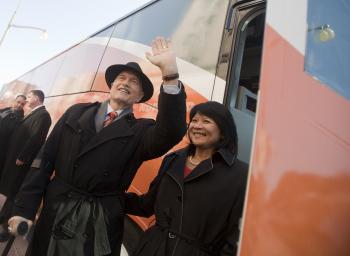 New Democratic Party leader Jack Layton waves to the crowd as he boards the bus with his wife, NDP Member of Parliament Olivia Chow, following the NDP's campaign kickoff event at the Chateau Laurier in Ottawa on March 26. (Geoff Robins/AFP/Getty Images)
US

The New Democratic Party is quickly overtaking the Liberals which would deny Conservatives of a majority in the House of Commons, according to a new poll projection released on Monday.

EKOS Research, which offers seat projections based on its opinion poll results from last Friday to Sunday, predicts that the NDP would secure 100 seats in the upcoming May 2 general election, almost a threefold increase from its current 36 seats.

If the level of support remains unchanged until the election, the NDP would come in second in seat count to the Conservatives, who are projected to gain 131 seats, 12 seats fewer than its current 143-seat holding in the House.

Under that scenario, with the support from the Liberals—who are projected to garner 62 seats—NDP leader Jack Layton would be able to have a working majority in the 308-member House, and therefore a coalition government instead of Stephen Harper’s Conservative minority.

The seat projection also predicts 14 seats for the Bloc Québécois, none for the Green Party, and one for an independent member of Parliament.

In terms of popular support, the EKOS opinion poll shows 33.7 percent support for the Conservatives nationally among decided and leaning voters; the NDP has 28-percent support; the Liberals 23.7 percent, the Green Party 7.2 percent, and the Bloc 6.2 percent.

If those figures held true on May 2, it would be the worst outcome in the history of the Liberal Party, and the best ever for the NDP.