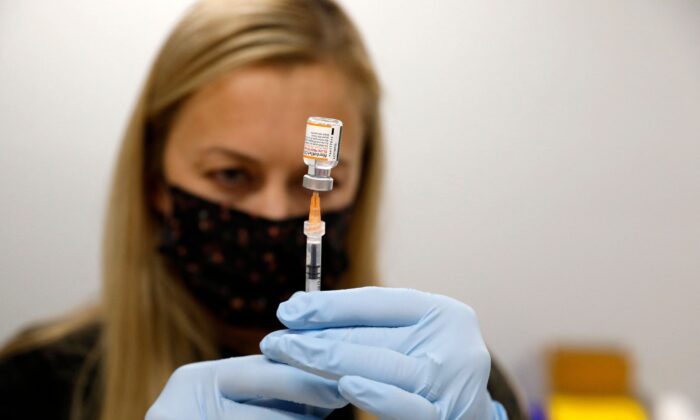 About one-third of Americans said they hadn’t received a COVID-19 vaccination, according to a new poll from the Economist/YouGov survey that was recently released.

The poll asked (pdf) respondents to indicate whether they had received a vaccine for the CCP (Chinese Communist Party) virus, which causes COVID-19, and about 31 percent said they had not.

The survey, which was carried out between Jan. 15 and Jan. 18, polled roughly 1,500 U.S. citizens and has a margin of error of plus or minus 2.8 percentage points.

The survey comes after the Supreme Court wrote in a 6–3 majority opinion on Jan. 13 that the Department of Labor’s Occupational Safety and Health Administration (OSHA) likely doesn’t have the authority to issue a vaccine-or-test mandate, which was slated to apply to businesses with 100 or more employees.

“The Act empowers the Secretary to set workplace safety standards, not broad public health measures. Confirming the point, the Act’s provisions typically speak to hazards that employees face at work. And no provision of the Act addresses public health more generally, which falls outside of OSHA’s sphere of expertise,” the opinion reads.

Some companies have opted to keep the vaccine mandate despite the Supreme Court ruling. But some companies, including Starbucks, dropped the requirements.

“So, is submitting to a COVID-19 vaccine, particularly when required as a condition of one’s employment, workplace conduct? The answer to this question became a lot clearer after the Supreme Court’s ruling earlier this month,” U.S. District Judge Jeffrey Brown, an appointee of former President Donald Trump, wrote in his opinion.

The federal government appealed the ruling shortly after it was handed down.