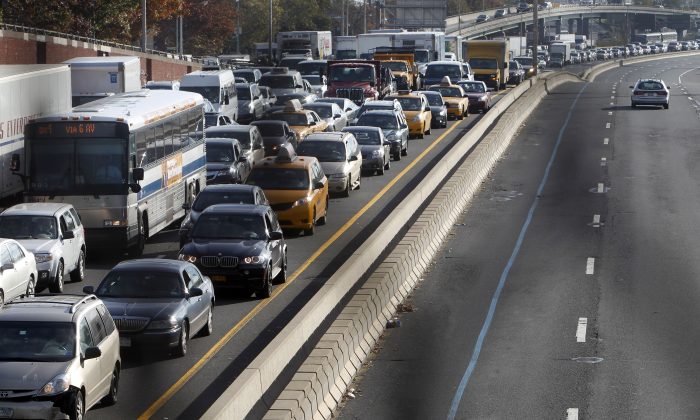 Congestion on the Long Island Expressway into Manhattan near the turn off for the Queensboro Bridge, Nov. 1, 2012. (Jason DeCrow/AP)
New York

That traffic is an issue in New York City is no surprise, but a new Quinnipiac University poll showed that 86 percent of voters say traffic congestion is a “very serious” or “somewhat serious” problem.

When asked how the city should fund maintenance for roads, bridges, and mass transit, 18 percent of voters said to raise the city sales tax, 26 percent wanted higher state gas taxes, and 23 percent preferred adding tolls to bridges into Manhattan.

Voters were against adding tolls to the currently free East River bridges (71 – 23 percent), but were a little more receptive to the idea if tolls were lowered on the other bridges. Drivers opposed the swapping 51-43 percent while mass transit users opposed it 49-42 percent.

The toll swap idea has been pushed several times by traffic guru Sam Schwartz, who has currently one iteration in the works. Schwartz plans to meet with as many stakeholder groups as possible through the year, tweaking the plan to gain consensus.

“Should you have to pay to drive across the East River? New York City voters from every borough reject the idea, as they have for years, even as a possible partial remedy for congestion,” stated Quinnipiac University Poll Assistant Director Maurice Carroll. “Suppose, as some policy wonks suggest, a tradeoff imposing tolls on the free bridges, while cutting tolls on the brides between the other boroughs. Voters still say no, but not so heavily.”