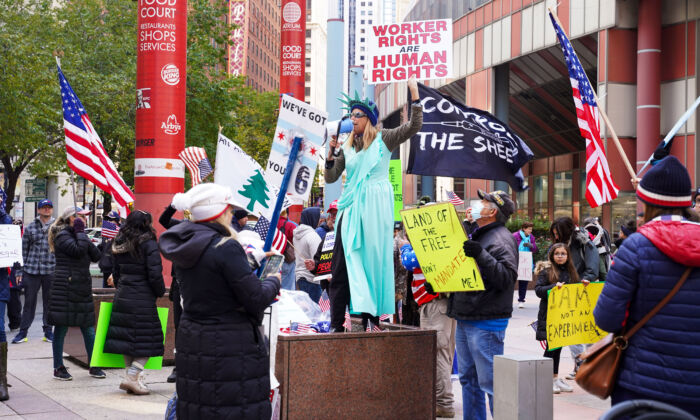 Hundreds of Chicagoans protest against the city's vaccine mandate at a rally outside the James R. Thompson Center in downtown Chicago, Ill., on Nov 3, 2021. (Cara Ding/Epoch Times)
US News

Poll: More Than Half of Unvaccinated Americans Say ‘Nothing Will Change’ Their Mind

A new survey published in the Scientific Reports journal revealed that more than half of unvaccinated Americans say that nothing will change their mind about getting the COVID-19 shot.

Researchers with the Barcelona Institute for Global Health, the City University of New York, and Emerson College Polling surveyed about 6,000 American adults in April 2021 before releasing their findings on Thursday.

Of all the adults who were surveyed in the spring of this year, about “20 percent were unwilling to vaccinate, expressing concerns about vaccine efficacy and safety and questioning the disease’s severity,” the researchers wrote.

Even though the study was carried out several months ago, White House COVID-19 coordinator Jeff Zients said during a briefing earlier this week that about 70 percent of all Americans are fully vaccinated and about 80 percent have received at least one shot, suggesting that Thursday’s study still appears to align with the current vaccination rates.

They also found that of the unvaccinated Americans, about 53 percent said that “nothing will change my mind” to get the shot, while about 13 percent said they would get the vaccine due to “assurance by a family member or close friend who got vaccinated.”

Responding to another question, about 48 percent of unvaccinated respondents affirmed that “I will not get the vaccine for any reason,” the researchers noted.

When breaking it down by political viewpoint, the study found that vaccine unwillingness was “uniformly greater among individuals with moderate (25.5 percent) to conservative (26.7 percent) political views, compared to political liberals (10.9 percent),” in a “trend that held across all metropolitan areas and the national sample.”

Meanwhile, “Compared to similar respondents from the other three metropolitan areas, both white and black residents of the Dallas metropolitan area were significantly less willing to vaccinate, as were those with less than a college degree,” it found.

Americans who had previously tested positive for the CCP (Chinese Communist Party) virus, which causes COVID-19, or had a close friend or family member get the virus were more likely to get the vaccine, it also found.

“More than a quarter of the national respondents did not believe that the dangers of COVID exceed those of the vaccine, a level of skepticism found less frequently in the metropolitan areas,” the researchers wrote. “One in five national sample participants also disbelieved that COVID can be prevented by vaccination; more so among participants who reported holding conservative views.”

The study, which was released during the start of the U.S. vaccine rollout, was carried out before the COVID-19 Delta surge. Meanwhile, vaccine passport systems and requirements to go to school or work have been implemented across different sectors of society.