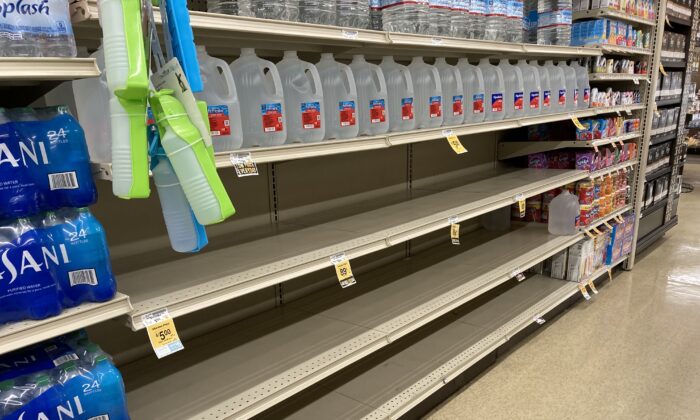 Empty shelves greet a customer at a Safeway grocery store in Williams, Arizona on Sept. 26. (Allan Stein/Epoch Times)
US News

More than half of American likely voters said they are facing delays or shortages when buying consumer goods, according to a recent poll.

Nearly 54 percent of respondents affirmed the problem, while less than 36 percent denied it. A bit over 10 percent weren’t sure, according to the poll by Trafalgar Group.

The results somewhat split along party lines. Among registered Republicans, Nearly 68 percent testified to delays and shortages, while only a little over 42 percent of Democrats said the same. Among those with third-party or no affiliation, a little under 51 percent answered in the affirmative, while 37 percent said no.

The poll was conducted on Oct. 15-18 among 1,079 likely general election voters. Trafalgar Group identifies such Americans as those who registered to vote roughly over the past year or have a history of voting in midterm elections.

Reports of shortages have been piling up for months. Microchip shortages have plagued automakers and electronics producers; lumber mills haven’t been able to handle demand, though the prices have cooled down significantly since the spring peak; ammunition makers have been playing catch-up with soaring demand for the second year now; various manufacturers have been complaining about shortage of metal, glass, and plastic articles from overseas markets, particularly China; Costco has started rationing toilet paper again.

The problems trace back to a mismatch between demand and supply stemming from various relief efforts and restrictions imposed in response to the CCP (Chinese C0mmunist Party) virus pandemic as well as related shifts in consumer preferences.

Consumer spending has returned to its pre-pandemic growth pattern already in March, propped up by enormous debt spending by the federal government. But the production capacity of the economy has lagged due to hiring struggles and supply disruptions caused by responses to the pandemic, particularly in the high-demand sectors. Hiring skilled workers has been a particular pain. Many, it appears, haven’t been in a rush to find work or are looking for a substantial pay raise.

The International Chamber of Shipping, a coalition of truck drivers, seafarers, and airline workers, warned last month that governments need to restore freedom of movement to transportation workers or risk a “global transport system collapse.”

The problems have led to substantial inflation in many sectors of the economy, including in food, fuels, and a number of durable goods, particularly used cars and trucks.

The Federal Reserve is expecting higher inflation to last for some time, though it’s not clear how long.