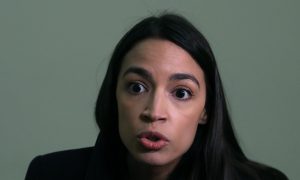 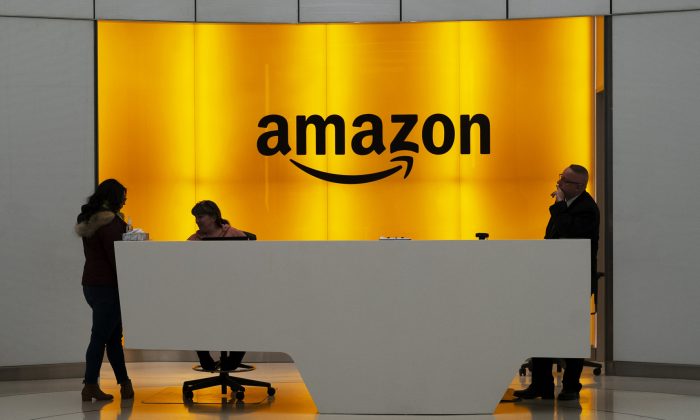 People stand in the lobby for Amazon offices in New York on Feb. 14, 2019. (Mark Lennihan/AP Photo)
US News

ALBANY, N.Y.—Most voters in New York think it was bad for the state when Amazon dropped plans to put a second headquarters in Queens and many think U.S. Rep. Alexandria Ocasio-Cortez (D-N.Y.) bears the blame for the deal falling through, according to a new poll released Monday, March 18.

The Siena College poll of registered voters in New York state found that 67 percent of those surveyed said the internet retailer’s decision last month was detrimental to New York. Sixty-one percent support the state and city again offering Amazon up to $3 billion in incentives to create 25,000 jobs if the internet giant reconsiders.

“While some may have celebrated Amazon’s announcement to pull the plug, the vast majority of New Yorkers of every stripe thought it was bad for the Empire State,” said Siena pollster Steven Greenberg. “Clearly, jobs outweigh the cost of government incentives in the minds of most voters.”

The company scrapped plans to redevelop a Long Island City neighborhood for one of its second HQs after the deal met mounting opposition from local elected officials who mostly objected to the incentives package going to a company owned by the world’s richest person, Jeff Bezos.

Among those leading the charge against Amazon was Ocasio-Cortez, who represents parts of the Bronx and Queens. When asked if several key players in the Amazon situation were a hero, villain or role player, 38 percent of poll responders said Ocasio-Cortez was a villain, compared to 12 percent who call her a hero and 24 percent who considered her a role player.

When Amazon announced Feb. 14 that it was backing out of the Queens deal, Ocasio-Cortez said in a tweet: “Today was the day a group of dedicated, everyday New Yorkers and their neighbors defeated Amazon’s corporate greed, its worker exploitation, and the power of the richest man in the world.”

Corbin Trent, a spokesman for Ocasio-Cortez, declined to comment on the poll.

Speaking on WAMC radio Monday morning, Cuomo said he’s not surprised by the poll’s finding that most New Yorkers believe the collapse of the deal was bad for the state.

“Nothing that I didn’t know,” he said.

While Cuomo said he’s trying to get Amazon to reconsider, he isn’t optimistic.

“The horse is out of the barn,” he said.

The survey included questions on several other issues being debated at the state Legislature, including whether immigrants who entered the country illegally should be allowed to obtain drivers licenses.

A majority of voters—61 percent—oppose allowing immigrants to get a New York license if they didn’t enter the U.S. legally, while 34 percent support the idea.

The poll of 700 registered voters was conducted March 10-14. It has a margin of error of 4.2 percentage points.