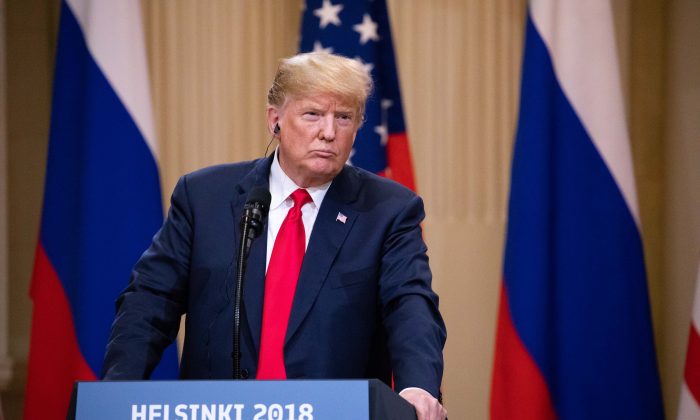 Poll: Less Than 1 Percent of Americans Believe Russia Is a Top Problem

Less than 1 percent of Americans consider the situation with Russia a top problem for the United States, according to a Gallup poll released on July 18.

The number of Americans who consider Russia to be the biggest problem facing the country has not surpassed 1 percent in any of the past seven months, the pollster found. While major news outlets have relentlessly pushed the Russian interference narrative for nearly two years, Americans remain overwhelmingly more concerned about domestic issues, with concerns about immigration and the government topping the list of the biggest problems.

Stories surrounding the allegation that Trump campaign associates colluded with Russia have saturated media coverage since the president was elected. To date, no evidence or indictments substantiating that allegation have surfaced.

The lack of proof and the negligible concern from Americans on the Russia issue may be contributing to President Donald Trump’s resilience in presidential approval polls. In 2018, Trump’s approval rating has tracked closely to that of President Barack Obama during his first term, according to Rasmussen Reports, the pollster that was most accurate in predicting the outcome of the 2016 presidential election.

The Gallup poll was released on the heels of Trump’s summit with Russian President Vladimir Putin on July 16 and the July 13 indictment of a dozen Russian intelligence officers for allegedly attempting to interfere in the 2016 election by hacking Democratic computer systems. Gallup conducted the survey from July 1 to 11, before either event took place.

More than 1 in 5 Americans consider immigration to be the biggest problem facing the country, Gallup’s survey of 1,033 adults found. Twenty-two percent of respondents said “immigration” or “illegal aliens” when asked to name America’s biggest problem.

According to Gallup, the percentage of Americans who rated immigration as the top issue in July reached the highest level in the poll’s 17-year history. The previous peak of 19 percent occurred in April 2006, when Congress was considering a comprehensive immigration bill. The percentage spiked again in the summer of 2014, when large waves of illegal aliens flooded into the United States from Central America, according to Frank Newport, Gallup’s editor in chief. Over the survey’s history, an average of 5 percent of respondents have said immigration is the No. 1 problem.

“When Americans’ naming of immigration as the top problem has exceeded that average by a significant margin, it has reflected real-world events, political attention being paid to the topic, fluctuating salience of other issues, and news coverage,” Newport wrote on July 18.

Americans’ concern over immigration spiked three times during Trump’s first term, reflecting his focus on the issue. The president is pushing to build a wall on the southern border and for comprehensive immigration reform. Trump wants to end the visa lottery program, place limits on chain migration, and institute a merit-based system.

The July Gallup poll was conducted when the media extensively covered the issue of family separations at the border. The Trump administration has addressed the issue.

“Republicans have become increasingly likely this year to name immigration as the nation’s top problem, while, until recently, mentions of immigration had remained relatively low among independents and Democrats,” Newton wrote.

“Of course, partisan groups almost certainly have differing reasons for viewing immigration as the top problem currently,” Newton added. “Republicans are likely thinking of the underlying problem of illegal immigration per se and its impact on the nation’s economy and crime situation, while Democrats may be thinking more about the negative impact of the Trump administration’s policies and actions in cracking down on immigration.”

With the midterm elections approaching, lawmakers’ stances on immigration may play a crucial role. On the day the Gallup poll was released, the House of Representatives voted on a resolution in support of Immigration and Customs Enforcement. A total of 34 Democrats and one Republican voted against the resolution.

The list of the biggest problems is nearly identical among Democrats, Independents, and Republicans. Four of the five top concerns are the same for the three partisan groups:  immigration, government, unifying the country, and lack of respect for each other.

The economy and moral and ethical decline tied for fifth place among Republicans. Meanwhile, race relations and racism round out the top-five list for Democrats.

The government remains the top issue for Democrats, with 27 percent saying it’s the nation’s biggest problem.