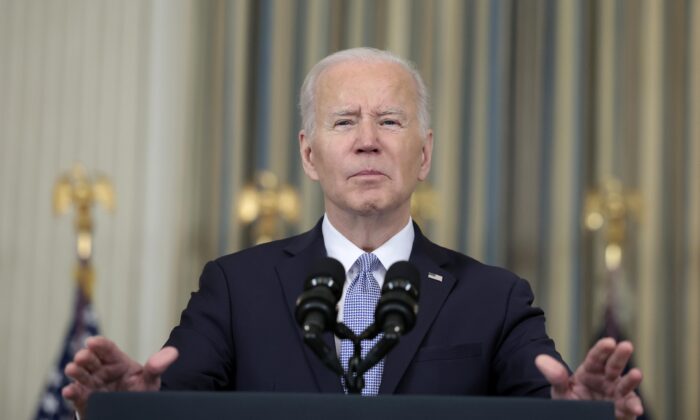 President Joe Biden delivers remarks on the jobs report for March from the State Dining Room of the White House in Washington on April 1, 2022. (Anna Moneymaker/Getty Images)
Politics

Fewer voters now identify themselves as liberal, according to a new national poll.

“The Left is losing the battle for the minds of the American electorate … with voters decreasingly identifying as liberal in recent years,” says the report (pdf) by Morning Consult, a research firm with offices in Washington, New York, and San Francisco.

The enterprise describes itself as “a global decision intelligence company delivering insights and custom market research on what people think in real-time.”

The ongoing annual poll is based on research on 8.6 million voters since 2017.

The segment of the U.S. electorate that now identifies itself as “very liberal,” “liberal,” or “somewhat liberal” has declined over the past five years, falling from 34 percent to 27 percent.

Moderates are now 28 percent of the electorate, a 4-point increase since 2017.

The figure for those uncertain about their political ideology now hovers at 7 percent, up from 3 percent a half-decade ago.

The collapse in support for liberalism is driven largely by voters who lack a college degree and by blacks and Hispanics who are moving away from the “liberal” identifier faster than white voters.

“While the nonwhite shift is pronounced by education, black and Hispanic voters with a college education have also become less likely to identify as liberal in recent years,” the report says.

“Beyond educational differences, age also appears to play a role in the recession of liberalism.

“The share of young people—ages 18-34—who identify as liberal has dropped more than the other age groups, followed by smaller declines among voters ages 35-44, 45-64, and those 65 or older, in that order.

“Among each age group, Black and Hispanic voters were more likely to move away from the ideological left than white voters.”

Non-white voters have been leaving the Democratic Party, which, along with its leaders, are increasingly seen as liberal, for years.

Democratic data scientist David Shor, who believes his party should embrace popular policies and not write off voters, said the findings are potentially “super important,” according to the report.

Although President Joe Biden and former president Donald Trump are clearly recognized as the faces of their respective parties, Morning Consult’s annual State of the Parties survey released Aug. 15 suggests voters are becoming less likely to view them as their best representatives.

Fewer than 1 in 5 Democratic voters (18 percent) say Biden best reflects the Democratic Party’s current values, down from 30 percent in a survey carried out a year ago.

About 2 in 5 Republican voters (39 percent) view Trump as the best representative of the Republican Party’s values, down from 47 percent who said the same last year.

In the State of the Parties survey, 73 percent of voters said the Democratic Party was liberal, up from 67 percent in mid-2017 with larger increases among voters lacking college degrees (62 percent to 70 percent) and Hispanics (65 percent to 75 percent).

“As voters moved away from the liberal identifier, they have also become more likely to associate the conservative label with the Republican brand (60 percent to 70 percent), including similar movement among the key demographic groups.”

Republicans have used this perception that Democrats have gone too far leftward against them.

“In 2020, with all the talk of a Hispanic shift, and an African American shift to a lesser degree, it was really kind of a shift among Hispanic conservatives.

“It was like, people already have this fixed ideological predisposition, and they’re just aligning that to their vote choice,” Republican pollster Patrick Ruffini said, according to Morning Consult.

“But what’s also happening, and reinforcing that, is the underlying ideological tendencies are also shifting in conjunction with, or caused by, vote choice.”