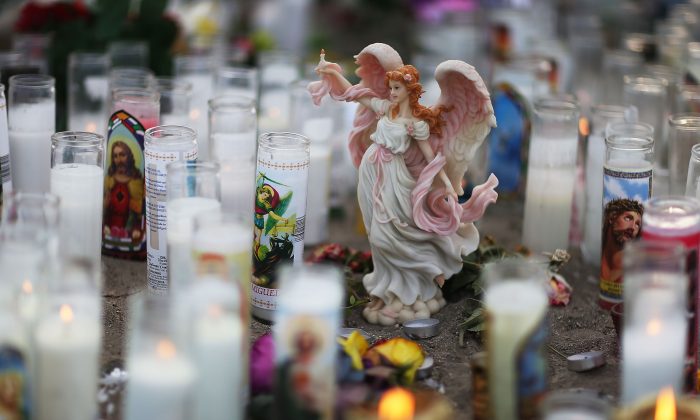 An angel statue is seen among candles at a makeshift memorial near the Inland Regional Center in San Bernardino, Calif., on Dec. 6, 2015. (Joe Raedle/Getty Images)
Opinion

Americans on edge following the terrorist attacks in Paris and San Bernardino, California, view terrorism as the biggest issue facing the nation, according to a new Gallup poll.

Nearly one in six Americans—16 percent—cited terrorism as the most pressing problem in the United States, surging five-fold from 3 percent at the beginning of November, before the two deadly massacres.

The percentage of Americans who contend terrorism is the nation’s primary concern is at its highest in a decade, since bombings in London, according to the poll released Monday.

President Barack Obama attempted to ease public anxiety during a speech Monday at the Pentagon, saying the U.S.-led coalition against the Islamic State is hitting the terrorist army “harder than ever.”

“ISIL leaders cannot hide, and our message to them is simple: You are next,” Obama said in reference to the Islamic State, also known as ISIS, following a meeting with his national security team and top generals.

He detailed military accomplishments, including a ramped-up bombing campaign and regained territory in Iraq and Syria, but he conceded that “progress needs to happen faster.”

ISIS claimed responsibility for the terrorist attacks in Paris that left 130 dead, and two apparent supporters of the group killed 14 in the San Bernardino mass shooting.

Americans have not been this worried about terrorism since 2004, when 19 percent labeled it as the greatest concern after the Madrid train bombings. The following year, concerns peaked again at 17 percent after the 2005 London train and bus bombings.

Though the December survey reflected another spike, the number of Americans worried about terrorism today still remains far below the 46 percent who said terrorism was the nation’s most pressing issue after the Sept. 11, 2001, attacks.

The Gallup survey also found that Republicans are far more likely than Democrats to name terrorism as the nation’s top issue.

Nearly one-fourth—24 percent—of Republicans reported that terrorism is the greatest concern compared with 9 percent of Democrats and 15 percent of independents.

Americans also pointed to the nation’s government and leadership as a concern, with 13 percent calling it the United States’ most pressing issue.

Worry over crime involving guns also rose from 3 percent in November to 7 percent in December, though the spike mirrors October’s percentage.

The number of Americans concerned about the economy shrank to 9 percent, marking the lowest point since 2007, before the stock market crash and ensuing recession.

Gallup surveyed 824 adults through landline and cellphones Dec. 2–6. The poll has a margin of error of plus or minus 4 percentage points.

Natalie Johnson is a reporter for The Daily Signal and graduate of The Heritage Foundation’s Young Leaders Program. Copyright The Daily Signal. This article was previously published on DailySignal.com