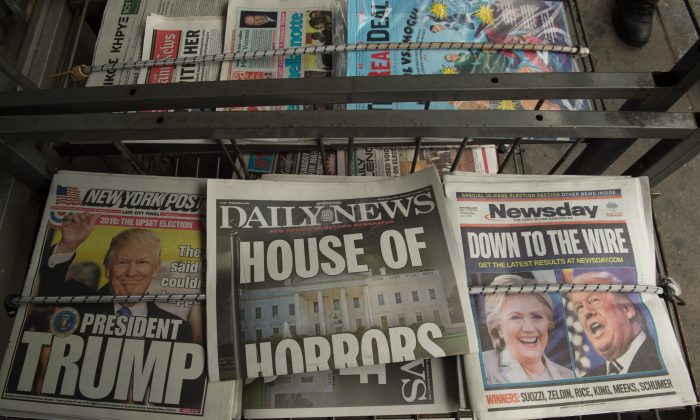 Newspapers for sale in New York City following Donald Trump's presidential win on Nov. 9, 2016. Donald Trump has pledged to unite a nation deeply divided after the bitterest election in recent memory, vowing to be a "president for all Americans." (BRYAN R. SMITH/AFP/Getty Images)
US

A new poll has found that more Americans are divided than ever following the election.

The CNN/ORC poll, released on Sunday, said that 85 percent Americans have said the country is more deeply divided. About 14 percent say that it’s not divided. The last poll asking the same question, carried out in February, found that 78 percent of people thought the nation was deeply divided on major issues. Before that, a poll in January 2013 found that 76 percent of Americans are more divided.

The findings “suggest a sizable minority personally agree with both parties on at least some issues, and nearly 8-in-10 overall hope to see the GOP-controlled government incorporate some Democratic policies into its agenda,” CNN wrote.

More than half of the poll respondents said that they were dissatisfied with the way democracy is working in the United States.

The poll found that less than half, or 40 percent, said that Trump’s win means that he has the mandate to pursue an agenda that his supporters favor, while another 53 percent said that he should try to back a mandate to attract new supporters.

In addition, 51 percent of respondents said they would support an amendment to the Constitution that could allow a presidential candidate to win based on the popular vote instead of the current Electoral College system. Another 44 percent of respondents told pollsters that they preferred to keep the current Electoral College system.

The poll surveyed 1,003 adult Americans via telephone from Nov. 17 and Nov. 20. The margin of error is plus or minus 3 percentage points.