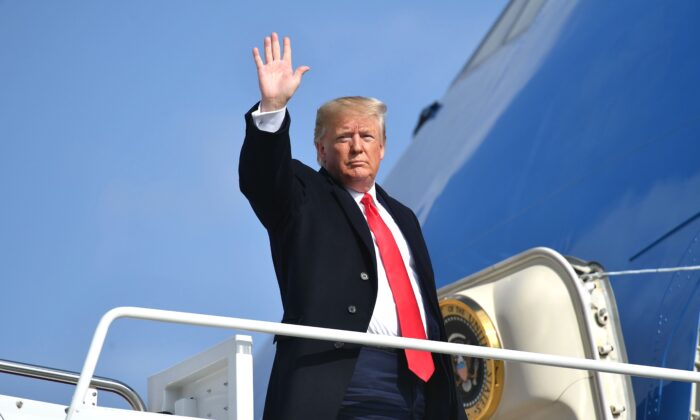 President Donald Trump makes his way to board Air Force One before departing from Andrews Air Force Base in Maryland on Nov. 20, 2019. (Mandel Ngan/AFP via Getty Images)
By Jack Phillips

A new poll found that fewer Americans are closely following the impeachment inquiry as compared with several weeks ago.

The Hill/HarrisX poll released on Friday found that interest in the inquiry has dropped to 62 percent, from 70 percent in early November.

It could be a bad sign for Democrats in an election year if voters have already tuned out the proceedings.

“Seventy-one percent of Democrats said they are following the impeachment inquiry, compared with 78 percent in early November. The number of GOP voters who said the same plummeted 10 points to 60 percent,” The Hill wrote.

Recently, some Democrats in Congress have signaled that impeachment might hurt their caucus, with Rep. Dan Kildee (D-Mich.) saying that his constituents are more interested in issues that affect them directly rather than the inquiry against President Donald Trump.

“Mostly, I hear that they want us to work on issues like the prescription drug prices, trade, and the economy,” Kildee told Fox News on Dec. 5. “They do offer their thoughts on this and I think that’s positive, but mostly the American people want us to work on the issues that affect them at the kitchen table everyday.”

In Michigan, Rep. Elissa Slotkin (D-Mich.) was heckled and booed by some constituents during a town hall meeting after she spoke about impeaching Trump. “Myself and six other members of the freshman class in Congress, all former military or former CIA, wrote a joint op-ed and came out in support of an impeachment inquiry,” Slotkin said during the town hall as several members of the audience voiced their displeasure. “And I wanted you to know from me—I wanted you to know from me.”

Last week, the House Judiciary Committee released a 52-page report, titled “Constitutional Grounds for Presidential Impeachment” (pdf), as a guide for impeachment as the committee’s chairman, Jerrold Nadler (D-N.Y.), prepares to draft articles of impeachment against the president.

“Within these parameters, and guided by fidelity to the Constitution, the House must judge whether the President’s misconduct is grave enough to require impeachment,” the report states. “That step must never be taken lightly. It is a momentous act, justified only when the President’s full course of conduct, assessed without favor or prejudice, is ‘seriously incompatible with either the constitutional form and principles of our government or the proper performance of constitutional duties of the presidential office.’”

Trump and Ukrainian officials have denied Democrats’ allegations of a quid pro quo.

The Hill-HarrisX poll was carried out online among 1,001 registered voters between Nov. 30 and Dec. 1 and has 3.1 percent margin of error.